MAP25: Deltas and Ladders (in Vanilla ports, named "Deltas Ladder" on the automap) is the twenty-fifth map of 1000 Line Community Project. It was designed by Poohlyash and uses the music track "Midnight's Approach" by Brayden Hart (AD_79). 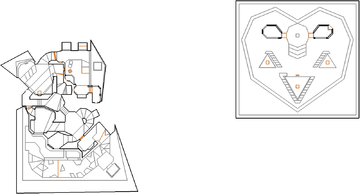 Map of Deltas and Ladders
Letters in italics refer to marked spots on the map. Sector, thing, and linedef numbers in boldface are secrets which count toward the end-of-level tally.

Take the rocket launcher in front of you then head forward to find some zombiemen and a chaingunner in front of a switch, which will raise some steps leading up to the east platform. Go up these steps and enter the teleporter at the top to reach a room with a chaingunner (or two Hell knights on Hurt Me Plenty (HMP) skill level or higher, then head north until you drop into a curved passage leading to an outdoor area with crates. Blow up the barrels at the south end to damage or kill the knights waiting behind them, then step past the barrels to find an armor and a button that will lower one of the crates to reveal a second button. Press this button to open the door to the south-east and reveal demons and imps guarding a third button, then go through the door and press that button to open a wall above the crates hiding zombies and a revenant (or arch-vile on Ultra-Violence and Nightmare). Use the small lift next to the crates to get up to the north side of the storage area then run across the crates to reach the fourth button, which will open two alcoves behind you holding spectres and cacodemons (and an arachnotron on HMP or higher). Ride the lift up again then look at the wall opposite the arachnotron alcove to find a fifth button that will raise some steps back up to the entrance teleporter, then step on this teleporter to return to the starting area.

Back in the starting area you will find that steps leading up to the west platform have risen; zombiemen and imps have appeared there, and some cacodemons have appeared inside the gray buildings to the north (there will also be arachnotrons and lost souls on HMP or higher). Go up the steps to the west platform and enter the teleporter here to enter a water-filled passage, then follow it to the end and flip the switch on the right-hand wall - through the fence, you will see some steps rise in an earlier area. A door to the south will open to reveal spectres and shotgun guys, so go through it then head down the stairs on your left before going down another set of steps to a dark tunnel with a red key door. Lower the metal lift at the end of the tunnel and kill some waiting shotgun guys then ride it up and head north-west to find a radiation shielding suit - with this item you can safely head south and east through the nukage to a set of stepped platforms which lead up to the red keycard.

With the red key, drop back into the nukage and follow it north and west to two chaingunners (and a knight on HMP or higher) guarding the red key door you passed earlier. Go through the door and turn right to kill two spectres, head back up the steps then go west into a bright room with another red key door that you need to pass through. In front of you is a button that will lower some bars and allow you to return to the area you explored at the start of the level - kill the arch-vile and knight that are released then head up the dark steps you raised earlier and press the button at the top, then step on the nearby teleporter to return to the starting area. You will see that steps have risen around the large gray platform to the south - go up these steps and enter the teleporter at the top to finish the level.

When you return to the starting area after exploring the north side of the main level, you will find that lifts leading up to the north buildings have risen. Go up the west lift to find a shotgun and ammo pickups.