MAP25: Demonic Hordes is the twenty-fifth map of the second release of Alien Vendetta. It was designed by Vincent Catalaá and Sam Woodman. It uses the music track "You Suck," the game over theme from Rise of the Triad. In the first release, it was MAP24, with the MAP25 slot taken by Valley of Echoes. Valley of Echoes was replaced in the second release by MAP24: Clandestine Complex, and Demonic Hordes was moved to the MAP25 slot. The level consists mostly of big battles with hordes of enemies teleporting in several areas as the player progresses through the level. 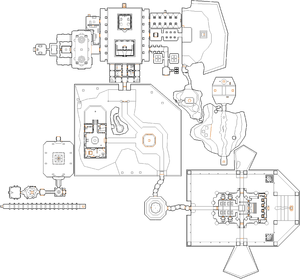 Map of Demonic Hordes
Letters in italics refer to marked spots on the map. Sector numbers in boldface are secrets which count toward the end-of-level tally.

This will likely be your toughest challenge in the wad, with the most amount of enemies to conquer out of all the levels here. There are a ton of supplies in the first room, so grab all you can. In the next room is a lone zombieman and a berserk pack. Crossing through the middle reveals chaingunners, and pressing the switch reveals more supplies and weapons. Keep going east, up the stairs to the plasma gun, then open the faceted wall in front of you. The switch inside opens the nearby door to the north. This room will present your first challenge. There are some caged barons of Hell in the middle. Go to the north end of the room and flip the switch to free the cyberdemon, then press on the strange wall behind him to release the caged barons and allow access to the portal to the next area. All the while various monsters will teleport in for you to combat.

Once you enter the portal, you will end up in an elongated hall with monsters all over it. You need to fend them off to reach the other side. Be sure to grab the megasphere on the other side of the teleporter before entering the next area.

On the other side, you will be walled in, but the switch inside lowers the walls for you into a large open courtyard. It also releases revenants, barons of Hell, and cyberdemons from the teleporter you just came out of. This place is pretty large, with a building to the west and a rocky wall in front of it. Inside this rocky wall are arch-viles and several supplies. You need to head inside the building. Inside is a fountain and several areas to go. At the top of the stairs, you will find the blue key on a pole guarded by many monsters, and you cannot reach it yet. There is a yellow door and a blue door inside the building that you cannot access either. You can shoot the stained glass windows to the west for pickups, including an invulnerability. But you need to head through the door to the southeast, into a library. You will be ambushed by shotgun guys when you walk in. Head behind the desk to find a switch, lowering the central bookshelf which has arch-viles and another switch. This switch lowers the blue key upstairs, but also releases cacodemons into the field. Enter the blue door inside the building. The room is filled with heavy weapon dudes. Head up the lift and press the switch here, which opens the southeastern gate in the field. A lot of demons and spectres will be released around the building too, and imps will teleport onto the ledges.

Go through the southeastern gate. Through the shaft here is a cauldron that will contain pain elementals and lost souls. Go through the eastern door through the next shaft to find yourself at a monster-infested chapel. Go around the chapel, gathering weapons, ammo, and health, and killing monsters. When you feel satisfied, head into the chapel to find it just as populated as it is outside. You need to head into the room behind the alter, where there is a raised area with a baron and some arch-viles. There is a switch up here, revealing another switch which lowers the yellow skull key on the bleeding altar outside. Go outside to get it, but be wary of a massive monster ambush when you do.

Now backtrack to the main field and you will find a ton of monsters roaming around, most likely due to arch-viles teleporting in that resurrected them. Get rid of them, then head back into the building taking the yellow door this time. There are arch-viles at the top here, and the switch here lowers the barriers blocking access to the northern building. Spider masterminds and arachnotrons will warp into the field, while cyberdemons will come in from the northern building. Through the halls in the building, head out into the plaza. This will be your next big area, with several buildings you can (or must) go through.

This last area is a hellish one with a singular path going north. There are, however, a ton of monsters on the ledges to the sides, including arch-viles. If you attempt to go westward towards the berserk pack in the lava, you will trigger cyberdemons directly in front of you. Past the path to the north, this area is fairly quiet and contains the exit. Press the switch to raise the bridge, then press the other switch to lower the exit. Watch out though, as a cyberdemon will teleport in once you press it.

* The vertex count without the effect of node building is 6037.