MAP25: Desecration is the twenty-fifth map of Community Chest 2. It was designed by Gene Bird. Unlike his other contributions, this level was designed specifically for the megawad. 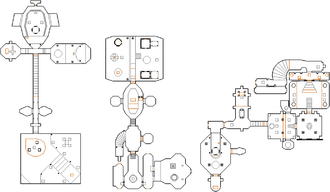 Map of Desecration
Letters in italics refer to marked spots on the map. Sector, thing, and linedef numbers in boldface are secrets which count toward the end-of-level tally.

Go up the stairs and take the right hand door, as the other one is locked. Here, take the left-hand lift and press the northern switch to lower a nearby lift to the east. The switch in this yard opens the other lift you were not able to access before. Make your way there and again, hit the northern switch. This causes the previously inaccessible door were you started to open. Head back there by hitting the southern switch and going through that door. Grab the red key being wary of some other doors opening and go through the red door to the north. There are several shacks here, go to the one in the southeast, then the northeast to raise a bridge to cross the nukage. Then go to the northwest shack to lower the teleporter to the next area. In the next monster-filled room, find the switch in the place with three wooden pillars to proceed. Go down the long hallway, all the way north into the next room. Hit the switch behind the platform where the arch-viles are located, and make sure you take the lift up to the balcony, because the yellow key is on the other end. The switch you pressed opens up the room on the right side of the hallway, and the switch there opens up the left to a teleporter to a different area. Fall into the nukage in this area and flip the switch into the next rocky area. Make sure to get the blue key before proceeding eastward through the next few rooms. Head through until you exit.

* The vertex count without the effect of node building is 1959.