MAP25: Escape From Spirit World is the twenty-fifth map of Doom 2 Unleashed. It was designed by Brian Knox (Snakes) and Captain Toenail, and uses the music track "Getting too Tense" by Robert Prince.

When using the music WAD included with this megawad, this level instead uses the music track "Darkness" by Paul Corfiatis. 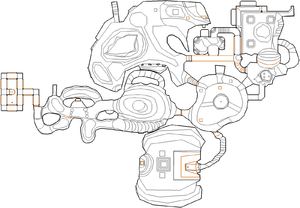 Map of Escape From Spirit World
Letters in italics refer to marked spots on the map. Sector numbers in boldface are secrets which count toward the end-of-level tally.

Take the shotgun in front of you then turn right and go past a yellow rock to a set of steps, heading down to find the yellow skull key at the bottom. Go back to where you found the shotgun and head north across three stone steps to a ledge with some imps, then turn left to see three more steps leading to another ledge with more imps. Follow the passage to confront a Hell knight (or three on Hurt Me Plenty (HMP) skill level or higher) as well as two revenants, then open the wooden door next to the yellow skull markers. The area behind the yellow key door is full of zombiemen. Follow the passage round to a T-junction then go either left or right until you reach an alcove containing the red skull key - approaching the key will activate several crushing ceilings in the area, so use caution when leaving.

Backtrack to where you found the yellow skull key - as you cross the small stone steps to the ledge with a marble demon face, it will lower and reveal a revenant (or an arch-vile on Ultra-Violence (UV) and Nightmare (NM) skill levels) which is teleported to a rock overlooking the yellow key area. Back at the area where you found the yellow key, look east to see a tunnel blocked by red skull bars which you can open by pressing use on them. Go into the next cavern to see the blue skull key on a platform surrounded by a blood pit and a circular walkway - kill the knights on the walkway and the cacodemons hiding behind the key platform, then go round to the east side of the walkway to enter a red tunnel. Go round the corner to face some shotgun guys and imps on a ledge, then head forward until you drop into a blood pool below.

Turn right and kill three approaching spectres then go into the tunnel they emerged from and follow it round to get outside - watch out for a demon waiting to ambush you from the right, and (on UV and NM) a revenant waiting on the left. Go up the stairs past the demon to an area with three marble columns and look round them to confront some revenants and chaingunners, then use the lift in the north wall to get up to a fenced walkway. Follow the fenced walkway round the corner, ready to kill several demons that ambush you from behind and the right, and press the skull switch at the end - this will lower a rock wall outside, but also lowers the three marble columns to reveal two or three pain elementals. Staying behind the fence will protect you from any incoming lost souls.

Once the pain elementals are destroyed, step off the walkway and go through the south wall that lowered when you pressed the skull switch then drop down the steps to the blood pool you went through earlier. A spine wall will open on your right and reveal a number of chaingunners, demons and imps which will start teleporting into the blood pool. Kill everything then go through the spine wall and climb the stairs to a junction, go straight forward and head round a corner to find a mancubus at the top of another set of stairs. Climb the stairs and turn left to kill three spectres, then press the button on your right - a wall will lower behind you revealing a knight and two demons (or three knights on HMP or higher). Kill them then go back to the junction and head west into a tunnel containing two barons, plus an arachnotron on HMP or higher - there is also a false wall on the right concealing knights on HMP or lower, or a mancubus on UV and NM.

Reach the end of the tunnel to find a backpack, then press the satyr switch in front of you to be carried up to a large cavern. Ride the lift up to a large cavern and kill two mancubi in front of you, head due west (following the bright red floor) until you see a white rock with one or more chaingunners on it then turn left to see a lion switch in front of you. Press this switch then head north-east (again following the red floor) until you reach a slime pit - pressing the switch raised a bridge across the pit leading to a ledge with imps, as well as an arch-vile on UV and NM. Kill them along with the three mancubi on a lower ledge, then cross the bridge and press the skull switch on the other side.

Go back across the bridge to find that a red rock wall has lowered to reveal two mancubi (or a spiderdemon on HMP or higher) along with a supercharge on HMP or lower. Kill these enemies then return to the floor you used to enter the cavern and go south to find a small tunnel - enter it and approach the brown wall in front of you, and the floor will lower to return you to the cave with the blue key. Two bridges have risen allowing you to reach the key, but it is being guarded by two revenants on I'm Too Young To Die (ITYTD) and Hey Not Too Rough (HNTR) skill levels, an arch-vile on HMP or a cyberdemon on UV and NM. Kill the monsters guarding the blue key and pick it up, then go to the south side of the cavern and press use on the blue skull bars here to open them. Head up the dark staircase until you reach a wooden walkway in a blood pool, which appears to be a dead end.

When you step off the walkway into the blood, the surrounding sky will disappear and reveal that you are surrounded by many monsters including imps, revenants and one or two cyberdemons, as well as mancubi and chaingunners on UV and NM. There are two marble blocks in the arena which raise and lower at regular intervals - use these as cover whenever possible and pick the BFG9000 and megaarmor between them when it is safe, and pick up the medikits, ammo and supercharge dotted around the arena as needed. At the west side of the arena are some steps leading up to a metal column - by the time all the monsters have been killed, the column will have lowered to reveal a teleporter which you can step on to finish the level.

North of the yellow key area is a staircase leading up to a rocket launcher. There are several demons on the stairs, and the weapon itself is guarded by one or two revenants.

In the north cavern is a white rock with one or more chaingunners on top of it. A megaarmor can be found behind this rock (replaced with an armor on UV and NM).

This level has two player 3 starts (Things 415 and 416) but no player 4 start, so cooperative play is only possible with a maximum of three players. When three players are present, the extra start point will become a voodoo doll.

* The vertex count without the effect of node building is 2551.

This level's name is probably taken from Doom II's MAP28: The Spirit World. Both levels use the same music track, and the north cavern's design bears some resemblance to the central area of The Spirit World.

The outdoor area in the north-east of the level bears some resemblance to the red key area from TNT: Evilution's MAP28: Heck.