MAP25: Forgotten City is the twenty-fifth map of Scythe 2. It was designed by Erik Alm and uses the music track "Intolerance" from Seiken Densetsu 3. It is the last map of the earth jungle episode. 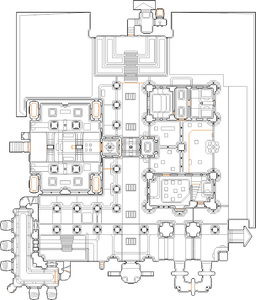 Map of Forgotten City
Letters in italics refer to marked spots on the map. Sector numbers in boldface are secrets which count toward the end-of-level tally.

At the start go forward and flip the switch to the left of the barrier. Turn around, move straight ahead and go right at the intersection. Remember the location of the red bars to your left, continue forward and climb up the stairs to your left. Go through the opening in front and the bars to your right will raise. Keep going forward until you spot a switch down in the blood to your left. Press it, return to higher ground and go left through the now raised bars.

Drop into the ground to your right and follow the path to another set of bars that will raise as you approach them. Past the bars is a small room with two switches: use the closest one to the entrance to raise bars behind you, allowing access to a big room. This area contains one room in each corner which houses a switch. Three of the rooms are closed, but the one in the southeast is not. Flip the switch inside to unlock the room in the northeast. Repeat the process to unlock the northwest and southwest rooms.

After pressing the switch inside the southwest room and exiting it drop down into the water to your left, climb the stairs to the right and take the teleporter. Collect the red key, exit this room and use the red switch to raise the red bars to the left. Go through them and drop down to the ground to your right. Climb the stairs in front and flip the switch to lower the barrier to the right, granting access to the starting area again. Continue forward and this time take a left at the intersection.

Go through the tunnel to the right and open the door in front. Take the stairs to your left, then turn left and exit through the opening on the right. Go to the water to your right and press the switch on the left side. Exit the water and go to the right into a dark corridor. Move past the yellow door to your left and enter the room to your right. Go around the pillar and use the switch. Exit this room and grab the yellow key on your right. Go through the yellow door and drop down to the ground from the window in front. Go to the red bars seen earlier and raise them, along with the yellow bars and pick up the blue key. Return to the area with the switch that lowered the barrier and climb up the stairs in front. Go through the blue bars, turn right and you should see an arrow on the ground pointing left. You can't go through the frame as it is too short, so face the wall behind and perform a suicide exit with the aid of the rocket launcher to propel you to the exit.

Be sure to have at least one rocket for the end of the level. There are a bunch on the map but you will need one to rocket yourself out.

From the top of the waterfall where the red key is located, shoot the face sign in front of you to open a small compartment in the same room containing a megasphere.

* The vertex count without the effect of node building is 7311.