MAP25: Hell's Park is the twenty fifth map of Perdition's Gate. It was designed by Mackey McCandlish (Avatar).

Plot: The slaughter areas. Rivers of blood flow throughout. Slowly you follow one of the rivers branching off on a possible shortcut. 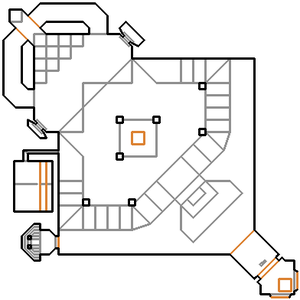 Map of Hell's Park
Letters in italics refer to marked spots on the map. Sector, thing, and linedef numbers in boldface are secrets which count toward the end-of-level tally.

A red locked door is directly behind your start location. Jump down off the ledge you begin on to cause stairs to raise in front of you leading up to the blood ledge.

Head to the far end of this ledge/room where there is a pyramid of pillars with an arch-vile at the top and head down one of the small corridors either side of the pyramid, which both lead around the back of the pyramid and merge, where you will find the red key.

* The vertex count without the effect of node building is 291.