MAP25: Infernal Infirmary is the twenty-fifth map of Project Einherjar. It was designed by Mike MacDee (Impie) and uses the music track "". 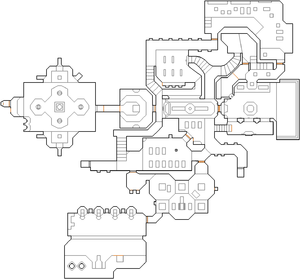 Map of Infernal Infirmary
Letters in italics refer to marked spots on the map. Sector, thing, and linedef numbers in boldface are secrets which count toward the end-of-level tally.

Your ultimate goal -- the blue key -- is on display at the start point. Grab the mines from the hedges and enter the hospital, where you immediately alert several patrols on the first and second floors. From the lobby floor the blue door is plainly visible on the upper balcony.

Do a combat sweep of the hospital halls before opening any doors: there are amazons, block docs, vampire docs, and purgers everywhere. Two switches will raise stairways to important areas: one in the office visible from the lobby, which raises stairs to the yellow key; another on a balcony in the records room on the second floor, which raises the stairs to the red door that guards the blue key (you'll have to leap across some bookcases to reach the latter).

Grabbing the yellow key triggers several ambushes. Kill the new enemies, then enter the yellow radiology lab and fight the vampire matron. Her death opens the door to the lab next door, through which you will find an Einherjar lab in the process of creating several new monsters. Lower the lift and grab the red key, then kill the monsters unleashed from their test tube wombs. Take the key to the red door and grab the blue key, triggering more ambushes throughout the hospital. When everything is dead, go through the blue room and take the lift to the final lab.

The stasis tube in this room has a disturbingly familiar face on it. After clearing out the lab's onslaught of ghosts and mommybots, flip the switch to release the cyborg revenant of Bloody Zira Vargstein. She is the deadliest Einherjar in the game, moving as fast as Thor and randomly unleashing various devastating attacks. She also has more health than the other Einherjar types. Use the machinery as cover and whittle her health down with rockets and Gauss rods: when she explodes, the exit door opens. Entering the exit alcove activates the lab's lift, in case you need to resupply.

There is another red door that guards a suit of blue armor in a gruesome organ harvesting lab. A second vampire matron lurks there.

In the red key lab, a gang of vampire docs fires upon you from the upper catwalk. Gather them on the lift before killing them: when you then lower the lift for the red key, you'll have an extra cache of health pickups as well.