MAP25: Meatball Carnage is the twenty-fifth map of 32 in 24, a deathmatch megawad. It was designed by Matt Cibulas (RottKing) and uses the music track "Axel F," the theme tune to Beverly Hills Cop originally composed by Harold Faltermeyer and sequenced to MIDI.

It was Cibulas' second map for the project, following GATES OF THE PHOBOS HALLS, and it was the twenty-eighth submitted map overall, arriving 52 minutes before the 24-hour mark. According to Cibulas, it took about two hours to build. Within half an hour, Cibulas entered a third map for the project, entitled "Combat Bastard," however it was ultimately cut from the final maplist. Meatball Carnage also has the unique distinction of being technically the only map in the WAD to use monsters, but this monster is a sole Commander Keen that performs no actual function. 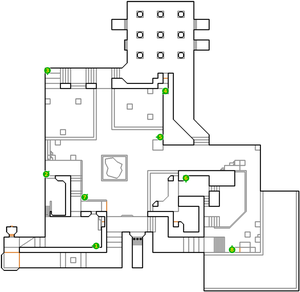 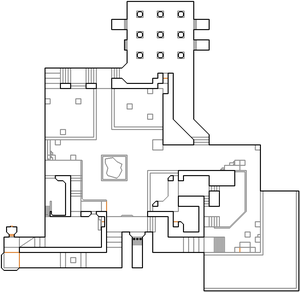 Meatball Carnage is quite large in size for a deathmatch map. It carries a city-theme, with the map area going in and around several buildings and outdoor areas. At the centre of the map is what appears to be a town square, with an artificial lake containing a green armor and two stimpacks.

A short road to the west of the square leads to a pile of crates which can be climbed to reach the upper levels of the south-west and north-west buildings. Additionally a super shotgun can be found behind the first crate along this road. The north-west building can also be accessed via the road to the north, and a rocket launcher can be found on its roof. From the road to the north, you can also enter an underground car park in the north-east of the map. This is also accessible from a long tunnel off of the eastern road. A megaarmor can be found along the north wall of the car park, and an open door in the north-east reveals a small alcove containing a super shotgun. A small lift in the south of the car park can be ridden to reach the roof of the north-east building. A BFG9000 is at the building's edge. Because the lift only works from one-side, it cannot be used to get down from this building back into the car park. As the only nearby spawn point is at the top of this lift, the car park is somewhat isolated.

The eastern road runs around the back of the south-east building. A chaingun is hidden behind the first large pile of crates when approaching from the centre. You will need to climb these crates to access the building, where on the roof you can find another rocket launcher, and a soulsphere. There is also a two-way teleporter here that leads to the interior of the south-west building. If you continue along the eastern road past the building, you will come to another collection of crates, as well as finding another super shotgun. As the entrance to the south-east building is on an elevated balcony, you can use this balcony to run across the tops of some of the crates. You can now drop into the hole between the southernmost crates to find a partial invisibility. Press the western crate to lower it in order to escape.

The end of the road leads into a dark waterlogged tunnel that is lined with health bonuses and crosses the southern border of the map. A backpack can be found in front of some metal bars, and if you look carefully, a Commander Keen can be seen in the darkness behind the bars. While it can be killed, doing so serves no purpose, as no sectors in the map have tag 666. Continuing westward through the tunnel, players will find a plasma gun before coming to a tall lift that leads into the south-west building. It is worth noting that the south-west building is also immediately accessible from the centre by means of another lift, as well as the aforementioned pile of crates that can also be used to reach the north-west building.

Players from the water tunnel enter the south-west building at the end of hallway, where a small exit door is located. On the other side is a tiny room with a chainsaw and an exit switch. Going up the hallway into the main room, players can find a chaingun and another partial invisibility up a small staircase. Additionally, the other end of the two-way teleporter is hidden behind a bookcase in the main room of this building.

This level contains eight spawn points. All spawns except #4 spawn with a shotgun.