MAP25: Mission Impossible is the twenty-fifth map of Invasion II. It was designed by Rick Lipsey and uses the music track "". 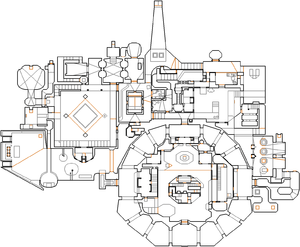 Map of Mission Impossible
Letters in italics refer to marked spots on the map. Sector numbers in boldface are secrets which count toward the end-of-level tally.

A revenant (Thing 418) in a closet in the east has no flags set for any of the three difficulty classes, so it does not actually appear in the level. It is at the same position as an imp on skills 1-3, so probably was intended to appear on skills 4-5. Also, four lost souls on skills 1-3 are outside the playable area in the west, so cannot be killed.

* The vertex count without the effect of node building is 2637.