MAP25: Perfect Hatred is the twenty-fifth level in the Ultimate Doom episode of the PlayStation and Sega Saturn versions of Doom. It is based on the original E4M2: Perfect Hatred, with modifications made to adapt the map to the consoles' limitations. The author of the original map is John Romero.

Unlike the original level, console ports do not include a secret exit as the Fear level does not appear on consoles. 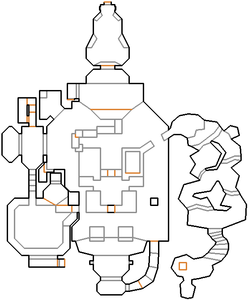 You will see two steps in front of you at the start. Run up the left step to the platform across the lava and press the switch on your right. This will open a wall behind you, so run through it and drop into the lava pit behind it. Turn around and press the switch behind you to raise a walkway around the room, then step into the small triangle of lava to the left to open an exit out of the pit in the north wall. Go through this opening, climb the stairs and go straight forward into a teleporter.

You will return to the starting area. Run up the left ledge to cross the lava, then go through the door on your left again. This time, go around the walkway you raised earlier - when you cross to the final ledge, approach the plasma gun found here to open alcoves in front of and behind you containing Hell knights. The alcove in front of you also contains the yellow skull key; try and fight the knights while staying on the walkway. Once they are dealt with, take the yellow key and backtrack to the starting area.

This time, run up the right ledge to cross the lava, then press the switch on your left (requiring the yellow key) which will open a structure ahead containing lost souls, plus knights on Hurt Me Plenty and Ultra Violence skill levels. The north edge of the structure is a long ledge leading to an opening in the wall; run along that ledge into the opening, leading into a cave with lava streams. Follow the caverns, watching out for spectres and cacodemons along the way, until you climb a staircase to a teleporter guarded by lost souls. Next to the teleporter is a small cavern containing the blue skull key, guarded by another knight. Get the key and step into the teleporter to return to the start point.

Run across the left ledge again and go straight forward to the blue skull pillar; open it and climb the staircase to the top floor. Go to the door ahead, which will open to reveal a room with cacodemons. Get past them and press the switch at the end of the room to finish the level.

If you drop into the lava in the central area, you can escape by heading to the south-east corner and climbing the lava stairs found here. At the top, the wall ahead will open to reveal a small room connecting to the start point. Watch out for the imps in this area.

A soulsphere can be found below the ledge before the blue skull pillar; drop east off the ledge to find it.

After opening the alcoves containing knights in the south-west room, head back round the walkway to the south alcove. Open the eastern metal wall to reveal a switch behind it; pressing this switch raises a platform between the two large platforms in the central chamber, making it easier to navigate this area.

After entering the eastern cavern, drop off the ledge and turn right. A chainsaw can be found in the corner.

* The vertex count without the effect of node building is 447.