MAP25: Stein und Stahl is the twenty-fifth map of Congestion 1024. It was designed by Brandon Bannerman (Catsy) and uses the music track "Evolution (The Grand Design)" by Symphony X. 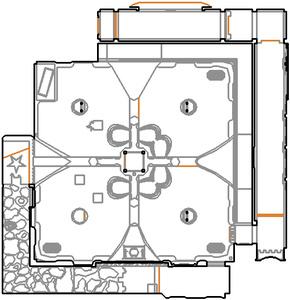 Map of Stein und Stahl
Letters in italics refer to marked spots on the map. Sector numbers in boldface are secrets which count toward the end-of-level tally.

At the start, follow the openings until you reach a skull switch. Flip it and turn around to see the wall in front lower. Go through it, turn left and press the switch at the end. Go back the way you came to see the floor has sunk. Drop down, enter the opening to your left, then follow the path to the right and collect the red key. Drop down to your right, then move towards the opening leading to the red key and ride the lift next to it up. Go forward into the corridor you were in earlier and follow it to the end to find a red door. Open it and use the switch in front, then return to where the red key was. Look to the right to see a bridge has raised, allowing you to jump to the exit teleporter.

The hanging bodies in the corridor before the red key prevent entering it.

* The vertex count without the effect of node building is 2702.