MAP25: The Eagle Has Landed (Valiant)

MAP25: The Eagle Has Landed is the twenty-fifth map of Valiant. It was designed by Paul DeBruyne (skillsaw) and uses the music track "Death Scythe" from Gundam Wing: Endless Duel. The par time is 4:30. 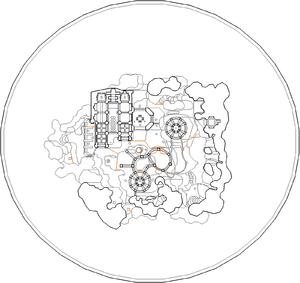 Map of The Eagle Has Landed
Letters in italics refer to marked spots on the map. Sector, thing, and linedef numbers in boldface are secrets which count toward the end-of-level tally.

Take the chainsaw on your right if you want it, then follow the path north past some zombiemen to a sealed door. Turn right and walk forward until you see the door to your left lower to reveal super imps and a super demon (the door you just passed will also open to reveal imps and a suicide bomber), then go inside the building and enter the east chamber to find a lift that you can activate to reveal an arachnorb (plus two more imps on Hurt Me Plenty skill level or higher). Head north into a short hallway that leads to a switch and pull it, which will release zombiemen and imps behind you, then drop down to the west side of the building to find that the floor has dropped to reveal a bridge over some damaging black liquid. Kill any waiting imps, shotgun guys and chaingunners then pull another switch on the north side of the bridge; this will raise some steps in the center of the building that you can climb to reach the blue keycard.

Go back outside and head east, looking to your right for a round building with a switch in its center column - flip this switch to reveal a second switch that will lower a lift inside the tower, revealing imps and shotgun guys next to barrels that you should blow up. Ride the lift up to the middle floor, then go through the open doorway and fight your way past some imps and zombies to a second tower with a switch in its center; this switch will raise the lift and allow you to reach its top floor, but will also cause two revenants to appear outside. Make your way back to the lift and flip the nearby switch to lower it again, kill the imps and shotgun guys that have appeared then ride the lift up to the top floor and fight your way north to a third tower containing more zombies. Go round to the north side of this tower to get the red keycard, but watch out for three imps and/or revenants that appear outside.

Go back to the lift and press the switch recessed into the east column to lower it again; as the lift rises, open the red key door in the south wall and step through it. Head south to a small cavern and kill any zombies waiting there, then go inside and look for a switch on the east wall that will lower some bars nearby. Head west through the bars then north; you can go left to get a super chaingun, then right to find the yellow keycard on a plinth. Drop to ground level and dispose of the demons and zombiemen that teleport in, then enter the building north of the circular lift to find a lever on a cross-shaped column that will lower the yellow bars blocking the doorways. Head north-east to some steps and climb them to the top, kill a waiting arachnotron then head south until you drop into a pit of black liquid. Two super mancubi will teleport to the ledge ahead, and some cacodemons and imps will appear behind you; run to the steps on the south side of the pit and kill the super mancubi, then climb the steps behind them to a path blocked by an arachnotron and two regular mancubi. Follow the path north to a gray room and step on the red X inside it to finish the level.

From the start, head north to the blue key building then go round to its west side to find a shotgun behind some barrels. Some enemies will teleport in behind you, so blow up the barrels to kill them.

* The vertex count without the effect of node building is 5073.