MAP25: The End Is Nigh (Hell Revealed II)

MAP25: The End Is Nigh is the twenty-fifth map of Hell Revealed II. It was designed by Pedro Arturo Gomez Blanco (PAGB666), Sam Woodman and Andy Olivera and uses the music track "Dance with a Skeleton," by Petter Mårtensen (Thyrbse). 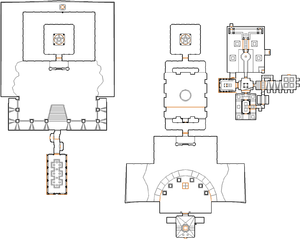 Map of The End Is Nigh
Letters in italics refer to marked spots on the map. Sector, thing, and linedef numbers in boldface are secrets which count toward the end-of-level tally.

Quickly get the shotgun as you fight the enemies straight ahead. After killing them, head through the next door, and midway through some chaingunners and shotgun guys will ambush you. There is a switch in the chaingunners room, which opens up the door ahead. You will have to fight a large armada of enemies at this point. There is a rocket launcher in the center of the courtyard, and a BFG9000 just before the next door, plus plenty of ammo to use against the monsters present. When you are finished, enter the next room and kill off the arachnotrons guarding the pentagram teleporter. At the other side, open the next door and prepare to fight off loads of imps, demons, as well as barons of Hell in the center. Approaching the door in the center lowers it revealing arch-viles, and the switch inside opens the other two passages in the room, both of which lead to the next door. It takes you outside, and there is yet another armada of enemies to contend with. After killing them, climb up the steps, and you will find the blue exit door, as well as a teleporter where numerous monsters emerge. After defeating them, take the teleporter.

In this cramped room, there are several doors. Two of them require keys, while the southern and eastern ones do not. You might want to kill the enemies in the southern room before proceeding to open the eastern door, but regardless, you will have to fight a lot of enemies behind the eastern door. The red keycard is in this room, but pressing the satyr switch does not lower the key. Instead, it lowers closets with arch-viles and revenants inside. It also opens a passage that lets you cross the bridge you just passed under. From there, get rid of any opposition that appears as you cross the next bridge (which is in the southern room) into the inside building. Upon entering it, flip the nearby switch, which will finally lower the red keycard, but be wary of arch-viles that inhabit the areas now.

Return to the cramped room from where you teleported into and open the red door. Kill the Hell knights inside and climb the tiny steps to the lion switch, which raises more steps that lead into the teleporter. You will wind up on the outside edge of the first outdoor area, where you can go behind the building. Here you will find loads of ammo, arachnotrons, and the yellow keycard. Now you need to make your way back to the cramped room, so you can access the yellow door to the north. Open it, and kill the baron of Hell and chaingunner up ahead. The blue keycard is in this room, but the switch on its pillar opens up the walls around you with chaingunners and arch-viles attacking. Drop down after killing them and dispose of the arachnotrons, then head for the southeast corner of this area. A lone zombieman guards a terminal you could use. After using it, the lift to the northeast will lower, with an arch-vile. Press the switch on the lift to ride up, then go west and then south. You will get the blue keycard. Drop down again and fight off a cyberdemon and two arch-viles. The cyberdemon cannot leave his pen so use that to your advantage. After killing all the enemies, inspect their whereabouts for two switches, which will lower the northwest lift revealing a teleporter. This takes you back to the room with the imp horde. Return to the second outdoor courtyard, and now with the blue key, you can open up the door leading to the exit room. Get rid of the monster horde inside, then after pressing the gargoyle switch, the bars will lower to the exit, along with two closets with revenants.

* The vertex count without the effect of node building is 2819.