MAP25: The Temple of Darkness (The Plutonia Experiment)

MAP25: The Temple of Darkness is the twenty-fifth map of The Plutonia Experiment. It was designed by Dario Casali and uses the music track "Adrian's Asleep" from Doom II (the same as Doom II's MAP25: Bloodfalls). 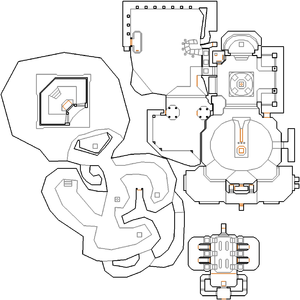 Map of The Temple of Darkness
Letters in italics refer to marked spots on the map. Sector, thing, and linedef numbers in boldface are secrets which count toward the end-of-level tally.

You begin in a magma-floored area, surrounded by shotgun guys on raised ledges. Walk straight forward to a junction and turn right to see some steps that will let you climb on to the ledges; when you reach the top, turn left and follow the ledge round until you reach the ledge just north-east of the starting point to find a recessed switch that you can flip. After doing so, walk east to drop down to a chaingun then go to the south-east corner of the magma area to find a super shotgun that you will want later.

Head north from the starting point to a V-shaped fork and follow either path to a brick building in the middle of a blood pool. Approach the building, watching out for three imps and two revenants behind you guarding a rocket launcher, then enter the building and push past two Hell knights standing on either side of a platform with a baron of Hell on it. Climb the steps on the north-west corner of the platform to get on top of it, then walk straight forwards into a sky-hole to reach the next part of the level.

You will be teleported into a green building, with a knight (or baron on Hurt Me Plenty (HMP) skill level or higher) in an alcove directly ahead of you. Take this room extremely carefully, or you will be forced to fight 12 enemies all at once in a very confined space.

Return to the center room, where the two silver doors either side of the teleporter pad have opened. Go through either door and follow the tunnel round to another button, which you can press to open a wall leading to the back of the pad.

After teleporting you will see the exit teleporter in front of you, although it is currently out of reach. There will be five zombiemen behind you, along with a revenant in front of you on HMP (two on Ultra-Violence (UV) and Nightmare (NM)). Step off the teleporter to get a plasma gun and use it to kill the revenants followed by the zombiemen, but do not walk past the metal arch in front of you as there are a number of shotgun guys overlooking the next room, as well as two arachnotrons in the distance on HMP or higher. Once the immediate area is safe, kill the shotgun guys in the cage to the east while using the arch as cover.

Approach the exit teleporter platform and head west into a darkened passage, going round the corner to a berserk pack. The doorway next to the berserk leads to some steep steps that curve down to a lava pool - go on to the steps to alert some cacodemons and one or two pain elementals, then go back into the passage and use it as cover while you pick off the enemies below. Once the path is made safe, carefully go down the steps and step across to a red tunnel (if you miss, the lower alcove next to it has a teleporter that will take you back to the top of the steps). Follow the ledge north, west and south until you get to a brick platform holding the yellow keycard as well as a button that you need to press.

Stepping on the brick platform will lower part of the south wall to reveal an elevated area with several imps as well as two revenants on raised platforms; the button you just pressed will raise a bridge connecting this new area to the darkened passage that held the berserk pack. Snipe them from the brick platform or the outer ledge, then head back round to the curved steps and go up them to return to the darkened passage. Cross the bridge and take cover behind the revenant platforms, as there are five chaingunners inside a long cage ahead of you; kill them all, then go to the south-west corner to find the blue keycard.

Go back to the room with the exit teleporter and proceed south to a circular lava pit with the red keycard in the center, which is blocked by some yellow skull bars. Go round to the south side of the pit and press the button here (requiring the blue key) to open it, then go through and turn right to find another button (requiring the yellow key) that will open the skull bars and allow you to take the red key. Go round to the north side of the pit and carefully walk along the narrow bridge to collect it.

Taking the key will lower two parts of the outer walkway into the lava revealing mancubi; some chaingunners will also be released behind you. Quickly drop into the pit and head east through an opening in the wall to enter a narrow passage holding a megasphere to your left and a radiation shielding suit to your right, as well as one or two revenants on HMP or higher. Take both items then return to the circular pit and head south past the mancubi to an area with brick walls, noting the shuttered windows on the east wall which conceal a pair of shotgun guys. Go west into a tunnel with two medikits and look north to see two alcoves with skull switches, which also contain revenants on UV and NM; press both switches then enter the teleporter behind you to get out of the lava.

You will be returned to the teleporter pad that you landed on when you first entered the temple. Immediately turn round and kill eight chaingunners that have been released behind you, then go to the north-west corner of the room and open the red bars here which are blocking your way to a button. Press the button to raise some steps around the exit teleporter and walk into the teleporter to finish the level.

Sometimes a shotgun guy may get stuck in the floor in the beginning area under certain circumstances.

* The vertex count without the effect of node building is 1264.