MAP25: Tribulation is the twenty-fifth map of Hellcore. It was designed by Devon West (Darkfyre) and uses the music track " ". 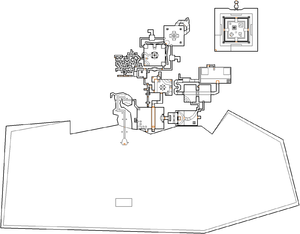 Map of Tribulation
Letters in italics refer to marked spots on the map. Sector numbers in boldface are secrets which count toward the end-of-level tally.

The soul sphere in Secret #3 becomes permanently inaccessible once you approach it, meaning that only 66% items is possible on this map.

* The vertex count without the effect of node building is 1852.