MAP25: Valley of Echoes is the twenty-fifth map of the first release of Alien Vendetta. It was designed by Anders Johnsen. It uses the music track of Heretic's E1M9: The Graveyard. In the second release of the megawad, this map was removed and replaced with MAP24: Clandestine Complex, with MAP24: Demonic Hordes moved to the MAP25 slot. 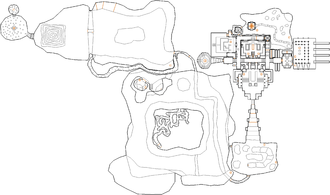 Map of Valley of Echoes
Letters in italics refer to marked spots on the map. Sector, thing, and linedef numbers in boldface are secrets which count toward the end-of-level tally.

* The vertex count without the effect of node building is 4410.

Anders Johnsen, the map's author, considered it "the least playable and worst looking map in AV"[1], which is why it was the one chosen to be replaced in the megawad's second release.