MAP25: Vulcana is the twenty-fifth map of Whispers of Satan. It was designed by Paul Corfiatis, who also wrote the music track for this level, "Crystaline". 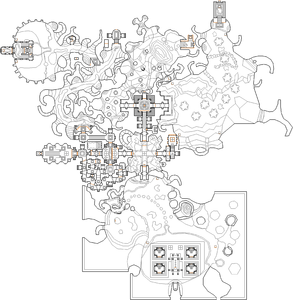 Map of Vulcana
Letters in italics refer to marked spots on the map. Sector, thing, and linedef numbers in boldface are secrets which count toward the end-of-level tally.

A cyberdemon will teleport away right in front of your eyes. You are in the middle of a four-way intersection, and the only door you can go through for now is the northern one. Before you head down this route, head northwest to a trail of health and armor bonuses all the way up to a super shotgun, then head through the north door. Kill the baron of Hell and descend the stairs and you will see the yellow skull key. You have two paths to take, but you must take both to get the key:

Left path: Flip the switch on the left lift to ride downwards into a rocky red cavern. Head generally northward and eastward, killing monsters along the way. When you reach the lava, hop on the rocks to reach a hut to the east. An arachnotron guards a switch inside of it, so kill him and press the switch to lower the yellow bars and then return to the yellow key room.

Right path: Take the lift down into a very large area with lava flows all over. You need to hop carefully on each red platform in order to progress down to where you need to go, which is the red shack with four switches on it. Be careful of lost souls and cacodemons as you descend. When you reach the red shack, press all four switches to open it. Kill the revenant and pain elementals inside, then press the switch behind the bars to lower them. Teleport back into the yellow key room.

After pressing the switches, grab the yellow key, but watch out for the imps that appear. Hit the switch behind them to open the way back to the hub and kill the arch-vile. Return and then open the yellow door. Open it to find a massive outdoor area with some blocks you need to travel. Go right and through the cave, climbing the rocks around the lava until you reach the blocks you need to cross. Cross to the other side and you will find the red skull key and four buildings. To get the key, you must enter each of these identical buildings and press the switches in each one, raising the stairs so you can grab the key. Each of the buildings has two chaingunners and a revenant. When you pick up the key, a closet opens up in front of you while imps and mancubi teleport onto the pentagram behind you. With the red key, go back to the hub and take the red door to the west. Attempting to reach the blue skull key in the next room results in bars closing and imps and Hell knights ambushing you from both sides. To open these bars, you need to travel down both sides.

North path: Kill the mancubi as you descend the stairs and open the door. Here, watch out for enemies as you traverse along the dark red path. Make sure you avoid the lava. Along the way you will find some metal bars you will need to open. Continue along the red path to the next door and press the switch behind it in order to lower those bars. Now go through this path, staying on the dark red path until you reach the red building up ahead. Enter it, and you need to press two switches upstairs to remove the set of bars straight ahead. Do so, and take the teleporter back to the blue key room.

South path: Open the southern door to be in a maze. The path to your left is blocked, so head right. Take the hall that is to the right of the barrel you see and follow it to a switch, being mindful of many monsters here. The switch will raise the bars that blocked the other path, so take that one all the way until you reach a door. Be extra careful as you are likely to get ambushed by several small monsters. Behind the door is a large room with monsters and a staircase leading up to a blue switch. The stairs rise up when you appoach it. Press the switch to reveal a baron of Hell and a teleporter back to the blue key room.

After you have taken both paths, head for the blue key but watch out for the baron that appears when you approach it. After grabbing the key, there is a supply room to your right, which will come in handy as the cyberdemon you saw in the beginning has now reentered the hub. Get rid of him and take the blue door to the east. When you attempt to reach the exit, it will close and you will be ambushed by Hell knights. Kill them and inspect the north closet for a switch which raises the bars so you can exit.

* The vertex count without the effect of node building is 9870.