MAP25: Wicked Garden is the twenty-fifth level of Plutonia: Revisited Community Project. It was designed by Xaser Acheron and uses the music track "After All is Gone" by Elric Sullivan (Fisk). The par time defined in MAPINFO is 2:30. 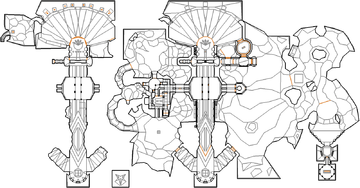 Map of Wicked Garden
Letters in italics refer to marked spots on the map. Sector, thing, and linedef numbers in boldface are secrets which count toward the end-of-level tally.

After following the blood river (see secret #4) and using the teleporter at its end, you are in a section of the map similar to the one you entered through the yellow door. You still can use the teleporter in the room similar to secret #3 to get back to the main section of the map. However leaving the semicircular stone floor around the pit where the rocket launcher is in to the surrounding stairs in the north lowers some bars that block the access to that teleporter. You have to fight two monsters (revenants on easy, arch-viles on medium and hard skill levels) that teleport on the pillars to the north while waiting for the bars blocking the exit to open. In single player, nothing but a rocket launcher, five rockets and a medikit in this remaining part of the map can be collected. So register any secret and grab any item in the rest of the map before leaving that stone floor. (In multiplayer, the bars can be opened again by a player that approaches those from the south of the stone wall with the demon face and pentagram on it. Also there are more items in multiplayer.)

Acquiring the key the normal way (dropping down on it from the north) forces the player to proceed further to the south, thus first triggering the bars in the southeast of the bloodpit and the (closed by default) accesses of the pit's exit lifts to close (Linedef 1504, Action: 110 - W1 Door Close (fast), Tag 3) and then, 8 map units southward, while crossing the edge of the key's alcove (Linedef 895, Action: 38 - W1 Floor Lower to Lowest Floor, Tag 2) trigger the blood pit to lower, enabling access to the switch (Linedef 1522, Action: 112 - S1 Door Open Stay (fast), Tag 3) that opens the pit exit lifts accesses and the bars.
The usage of the secret #1 shortcut enables the player to pick up the key (that is close to the edge) without triggering any of the lines (- leaving the pit is easy as long as it is not lowered).
But it is also possible to step in the key's alcove, crossing the southernmost trigger lowering the blood pit where the player will have to drop down, not triggering the bars and pit exit lift controls to close (since that linedef is 8 map units northward), then falling into the pit and be forced to push the only once usable switch down there to open the exit lift access. After using a lift to exit the pit, reentering the key's alcove to grab the remaining shells finally triggers the lift access as well as the bars in the southeast of the pit to close for good, keeping the player trapped.

This map was inspired by Helix, another PRCP map from the same author. The level was built in "A helluva lot less time than Helix took," using Doom Builder 2 and SLumpEd.

There are two red skull keys in this map, only the one next to a rocket launcher can be grabbed, but the map can be finished without picking up that key using secret #4.