MAP26: Aztec is the twenty-sixth level of PlayStation Final Doom, and the second level of the Plutonia episode. It is based on the PC version of MAP03: Aztec from The Plutonia Experiment, with modifications to accommodate the PlayStation's framerate and memory limitations and add enhancements such as colored lighting. It uses the music track "In The Grip Of Madness". 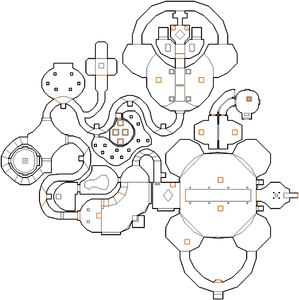 Map of Aztec
Letters in italics refer to marked spots on the map. Sector, thing, and linedef numbers in boldface are secrets which count toward the end-of-level tally.

Walk forward and go left up the staircase, where you will find a shotgun, medikit, box of shells and megaarmor. Go down the staircase to an outdoor area with vines on the walls. Walk forward (east) into the corridor ahead of you and follow it to the end. As you leave the corridor, a platform will rise with a Hell knight. Kill it and step on the platform it was waiting on to open the door. Go up the stairs, watching out for chaingunners and go through the north door, climbing the curved staircase to the end.

You will see a large pit with a bridge running east to west. There are four platforms overlooking the pit with arachnotrons and pain elementals. Across the bridge are some chaingunners, two Hell knights, and a blue keycard on a small platform. Kill the arachnotrons and elementals, then cross the bridge until a platform raises the knights. Kill them along with the chaingunners, hit the switch on the eastern side of the room, get on the lift that lowers and press the switch to the east; when the lift rises again, jump to the blue key. Cross the bridge back to the western side of the room and enter the teleporter that has been revealed. You will be on the south-eastern platform overlooking the pit. Go south into the hallway until you see a switch; walk backwards into the switch, kill the chaingunners that try to ambush you, and press the switch. Go back to the western side of the room, and use the teleporter to exit.

Go back to the outdoor room with vines, enter the north door and make your way down the corridor. In the hallway, you will go down a lift to a room with two chaingunners, a chainsaw, a box of shells and some health bonuses. Kill the enemies, grab the goodies and press the switch on the south wall so you can get back into the hallway. Further down the hallway it will divide into two paths; go down the path on your left to a room with the red keycard, guarded by a chaingunner. When you approach the key, two more chaingunners and two Hell knights will teleport in around you. Kill the enemies, grab the medikit if required, then exit, resuming the path through the hallway.

In the penultimate area where the blue and red teleporters are located, there is a small balk (linedefs 699, 701, 702 and 703) between two lamps in the previous room which is rendered distorted due to having an impoperly configured Y-offset.

Some monsters will never spawn in Single player and both modes of Multiplayer (Coop and Deathmatch) due to being set up to exclusively appear on Deathmatch which always disables monsters:

* The vertex count without the effect of node building is 1068.