MAP26: Ballistyx is the twenty-sixth map of TNT: Evilution. It was designed mostly by Mark Snell (with minor additions by Jim Lowell) and uses a music track shared with MAP16: Deepest Reaches.

This level was also ported to PlayStation Final Doom as MAP23: Ballistyx. 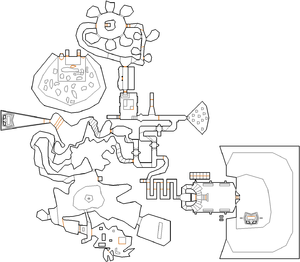 Map of Ballistyx
Letters in italics refer to marked spots on the map. Sector, thing, and linedef numbers in boldface are secrets which count toward the end-of-level tally.

You start the level facing an altar. To your right, enter the chapel. Inside, take the super shotgun and take staircase to walk around the wall. Slay the spectres and take a berserk (you can return to kill the alerted imps). Enter the brick passageway and kill a spectre. There will be a lift here going down.

Continue going down and killing spectres on your way until you come to a grey corridor. This corridor is a fork. Go to the left and open the door leading to a cave. Descend down. Be cautious here, as there are many ambushes consisting of shotgun guys. Proceed further down the linear path until you come to a cave with lava pool in the middle and the blue key. First, eliminate all the enemies that disturb you here, and then go to the key and take it. Do not blow the barrels, as they will be useful later.

Return to the fork corridor mentioned in the previous paragraph. This time, take the path to the north. Go straight the linear path eliminating small enemy groups until you come to a room. You can climb to the ledge via the lift to take a medikit and ammo (optional). Anyway, climb the staircase to a small door. In the next room, there will be two cages, one to the left is opened and contains imps. The other one also contains imps but is closed. When you try to open a door leading inside the cage, that second one will open immediately behind you, so be cautious. You can find a security armor and a box of shells within the cage but this is optional. Take the blue door. Here, you can go either to the left or right, but it is advisable if you take the path to the left now. Go straight to a weird low-ceilinged room with a slime on both the floor and ceiling. Walk around the wall and press the switch between two red torches. Return to the aforementioned wall as if you entered. Enter the teleporter ahead. This will lead you to a room from which a large outside area is overlooked. All you need here is just taking the yellow skull key (and a rocket launcher if you want it). You can fight enemies in the outside area to eventually get 100% kills on the level but this is time-consuming and even dangerous, since they can hide under the cage, so that they will be difficult to be noticed.

Back in the low-ceilinged room, you can eliminate enemies that come from the newly opened areas and collect some optional items. With the yellow key collected, return to the fork corridor.

In the fork corridor, go back to the south and to the door. Go straight the familiar caves until you get to the lava pool and the pedestal on which there was the blue key. Go to the southwest of the cave and here you can see yellow skull barriers. Open them and cross the lava river to the brick room. Go forward a bit until you can see a red torch on the right (all other torches in this room are green). Squeeze into a narrow passage in which there are enemies and items. The square metal block will lower behind you revealing a tough enemy for on your skill level and the red key. Take the key and return to the cave. Beware a chaingunner ambush here. Also, a large trap room in the southeast of the cave is opened. There are many enemies of various types. If you spared the barrels as was advised you can lure the enemies to them, and then blow the barrels in order to eliminate them fast and conserve munition. Return to the caves, this time use the shortcut at the north which was recently opened. Go to the right and climb the stairs to the door leading back to the grey corridor.

This time, head left. You should come to a room with the red door, candles and spectres. Enter the red door. In the white cave, go down. Eliminating the enemies turn right. The weird sky area is actually a teleporter which displays the altar of the area where you begin the level. One monster ahead is approaching you and eventually will be teleported. You can go straight and you will be either teleported to the very beginning area. Now, the exit is the altar itself (this is evident because of the two exit signs). Kill the only enemy here and step over the altar to end the level. 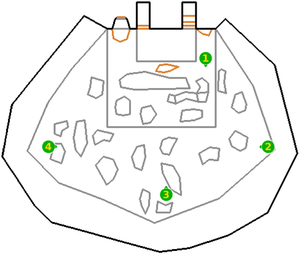 * The vertex count without the effect of node building is 1433.