MAP26: Between Scattered Corpses is the twenty-sixth level of Memento Mori. It was designed by Denis and Thomas Möller and uses the music track "Scary 1" by Mark Klem. 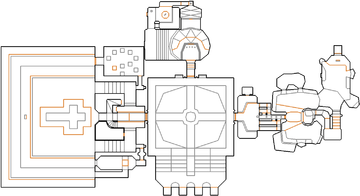 Map of Between Scattered Corpses
Letters in italics refer to marked spots on the map. Sector, thing, and linedef numbers in boldface are secrets which count toward the end-of-level tally.

Collect the plasma gun and bulk cell in your alcove and drop down. The opening arena contains a whopping five spiderdemons and twelve demons. The raised area in front of the spawn also contains a cyberdemon. This is fair game for co-op, but if you're playing this level on single-player, your only hope is to cause the spiderdemons to infight with each other and the cyberdemon.

Once this first arena has been cleared out, heal up and head through the western door. As you head down the corridor, two traps will open on either side, releasing up to 14 demons. While all of them are supposed to teleport into the opening arena, there's no guarantee that they'll do that, so keep your BFG9000 ready if it is available. Go into the southern trap, but instead of stepping past the lights, look west to find a narrow staircase. Go up this staircase to find a switch at the end.

When you flip the switch at the end, part of the staircase lowers, revealing a large room with a crucifix of blood. An invulnerability sits on the raised part of the blood crucifix. Step forward into the blood pool, and the room's walls lower, revealing a horde of mancubi and arachnotrons. An imp cage in the top part of the room's walls will also be revealed, with imps taking potshots at you from all directions. Use caution when approaching the invulnerability - while the arachnotrons won't move much and the mancubi are slow monsters, they will teleport away once they step outside of the lit floor, and one of the possible locations for them to teleport is on top of the invulnerability sphere. (If they teleport but do not reappear, they have teleported to the opening arena).

Once the monsters have been dealt with, equip the rocket launcher and flip the switch in the west of this large room. A door will open in the southeast - immediately proceed to it and dump your rockets through the doorway. Up to six Hell knights are in the room, and if they get out, they can teleport away. Go in the room and flip the switch at the end, which lowers a lift. Don't step on the lift immediately as it lowers - instead step on it as it raises, so that you don't have to spend time with a revenant (and on Ultra-Violence and above, a baron of Hell) in a small lava pit.

Ride the lift all the way to the top, and follow the corridor into the imp cage. Follow it all the way round to the northeast, where there is a door. This next room is a jump puzzle - run across the pillars with items to get to the doorway in the southeast. Fend off the revenant in this room and collect the red skull key.

Backtrack and drop into the lava. Take the concealed BFG9000 and get into the teleporter, which takes you back to the spot you were before attempting the jump puzzle.

You now need to backtrack to the opening arena. As you head out the door, walls in the imp cage will have opened to reveal cacodemons. This trap also has monster-only teleport lines, so they can teleport out to the crucifix, or into the opening arena. Deal with them and continue backtracking to the central arena.

Once back in the opening arena, deal with any stragglers that have teleported there, then proceed to the red door in the east.

This next area is monster-free, and is intended as a co-op puzzle. Four bars block the way to the next door. Depending on the number of players there are in the match, up to four alcoves are open. Only one player can go through any alcove before it shuts. The alcoves are opened in this order depending on the number of players, and the players must proceed to the next area in this sequence. Numbering the alcoves 1 to 4, from north to south and the bars 1-4, from west to east;

On single player, only alcove 4 is open, so you can head to the next area immediately. Open the wall with the metal crucifix and enter a sludge-filled area with spectres. Quickly go into the southern sludge pool and grab a radiation suit. Next, go to the northeast of this area, and notice an island with a switch panel. The switch on the "front" doesn't work, but the switch on the back does. As you flip it, up to four Hell knights will begin teleporting into this sludge pool, and a door will open ahead, with up to two spectres and six lost souls closing in. A trap has also opened near where the radiation suits were, with plenty of imps. Take them all out first before proceeding - that's not all the traps in this area.

Go back to the door that opened when you flipped the switch on this other side of the switch panel in the northeast. Proceed up the stairs and continue all the way to the end to grab the yellow key from its alcove. This also raises a bridge in the sludge for you to return to the previous room. Another trap will have opened to the north of the bridge with even more imps, so deal with them quickly.

As you return into the previous room, notice that a berserk pack has appeared. Also, two traps will have opened. One contains a horde of shotgun guys and the other has some demons. You can elect to put the berserk pack to good use, or simply flush them all out with a BFG9000 shot or two. Try not to step into the trap where the demons came from, or an arch-vile will teleport in and be busy resurrecting monsters in the opening arena.

Backtrack to the opening arena and head to the yellow door in the north of the opening arena. Walk forward and drop into the hole in the floor ahead. A sole lost soul awaits. As you continue further, bars descend in front of you for 30 seconds, up to 10 demon corpses teleport into the room and an arch-vile appears. The arch-vile is going to resurrect those demons right in front of your eyes. Don't bother shooting - the surrounding cage blocks shots (and prevents the arch-vile from immolating you). Once the bars raise, press use on the part of the cage behind where the bars were to raise the cage, then let rip on the demons and arch-vile.

Flip the switch behind the arch-vile to open a room in the west, with up to three barons of Hell. Go into the corridor north of this room to collect the blue key. You can see the exit portal from here. Return to the arch-vile's room and open the blue bar in the north. As you follow the corridor around, the exit portal will be blocked, and a trap will open with up to five mancubi.

Find the opening in this trap, which leads back to the corridor where the blue key was. Notice a new switch on the wall. Flip that switch, then return to the exit room to find that the portal has been unblocked. Step into the portal to exit the level.