MAP26: Blast Wave is the twenty-sixth map of Valiant. It was designed by Paul DeBruyne (skillsaw) and uses the music track "On Space Station" from Gundam Wing: Endless Duel. The par time is 6:00. 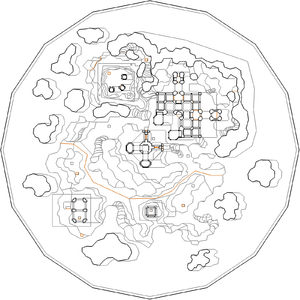 Map of Blast Wave
Letters in italics refer to marked spots on the map. Sector, thing, and linedef numbers in boldface are secrets which count toward the end-of-level tally.

As soon as the level starts grab the shotgun in front of you then step back, as there will be two cybruisers and a suicide bomber (plus two super imps on Hurt Me Plenty skill level or higher) in front of you. Head round to the north or east sides of the building and stand under the archways on these sides, where you will see buttons on the walls on either side of you - pressing the buttons on the inside walls of the building will lower lifts revealing more bombers. Ride the lift up and walk over to the north-east corner of the green walkway to find a lever and pull it, which will lower the inside walls to reveal still more bombers as well as chaingunners, then head past them to the south-west side of the building to find some health bonuses leading to the yellow keycard. Taking it will open the compartments containing the cybruisers, if you have not already killed them.

Drop down to the starting point and open the yellow key doors either side of it, kill any waiting arachnotrons then follow the gray pathway round to a switch inside a column with green stripes. Flipping the switch will open three closets containing cybruisers, suicide bombers, imps and a pyro knight; once they are cleared out, enter the compartment that the cybruisers emerged from to find the blue keycard. Return to the starting point and head due north up some steps, turning left near the top to find a button between some blue bars that you can now press. Climb the steps behind the bars and enter the green teleporter at the top to enter an enclosed section with three chambers, which will open to reveal three cybruisers as you step forward. Destroy them along with the bombers that teleport in, then take the red keycard inside the center chamber.

With the red key, step over the wall behind the red key chamber to drop back down to ground level, then look south to see a red key door in the pit below; behind this door is a radiation shielding suit that you will need to safely traverse the damaging black liquid in this area. Head west through the liquid until you get to some steps that lead up to a super chaingun guarded by one or two arachnotrons, then continue south-east to some more steps that lead up to another ledge with more arachnotrons as well as imps - try to avoid the arachnorbs that teleport in as well. Follow the ledge round to a tower and press the button between the red bars to open them, revealing a teleporter leading to the exit area. Dodge the imps and cybruisers that teleport in, activate the lift on the side of the structure and ride it up, then turn right and right again to reach the exit teleporter.

If you follow the path under the red key area round to its north-west corner you will come to a rocket launcher and some boxes of rockets. Approaching the items will cause bombers and revenants to teleport in and block your escape routes.

* The vertex count without the effect of node building is 3956.