MAP26: Bowser in the Black Abyss is the twenty-sixth map of Super MAYhem 17. It was designed by Michael Fraize (Marcaek) and rd, and initially uses the Bowser's Castle music track from Mario Kart 64, originally composed by Kenta Nagata, and remixed and sequenced to MIDI by Jarel Jones. During the boss fight, the music track changes to a MIDI rendition of "Bowser's Rage," originally composed by Yako Tsujiyoko for Paper Mario. 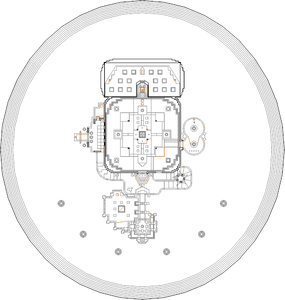 Map of Bowser in the Black Abyss
Letters in italics refer to marked spots on the map. Sector, thing, and linedef numbers in boldface are secrets which count toward the end-of-level tally.

* The vertex count without the effect of node building is 5442.