MAP26: Bunker is the twenty-sixth map of The Plutonia Experiment. It was designed by Dario Casali and uses the music track "Message For The Archvile" from Doom II (the same as Doom II's MAP26: The Abandoned Mines). 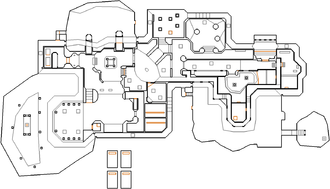 You only need either the blue or red keycard to exit this level - collecting both cards is not required. However, due to the design of this level's teleport traps, getting 100% kills requires collecting both keys.

You begin in an outdoor area. Head down the staircase in front of you (taking the nearby super shotgun if needed) without entering the room, and fire a shot to alert the assortment of monsters inside. It is preferable to stand at the stairs and not enter the cavern below, so that the monsters will line up while shooting at you and hit each other, resulting in monster infighting. Once the monsters are cleared, enter the cavern, which has a moat running through it, then kill the shotgun guys visible through the windows behind the moat before dropping into it. Follow the moat counter-clockwise eliminating any imps and cacodemons you find, until you reach a room with a blood-stained walls on your right and steps on your left leading up to a door. Go up the steps, which will open the blood-stained wall to reveal four chaingunners, then open the door and step through it.

If you wish to exit using the red keycard, from the door after the chaingunner trap, turn left (east) and go up a set of steps then walk straight forward down another set to enter a room with tech panels. As you enter the room the south wall will lower to reveal four chaingunners guarding a switch; flip it, then head west across the steps and along a long hallway, passing a row of shotgun guys as you go, until you reach a fenced window with a cacodemon under it. Turn right then left, go down a couple of steps and walk through the tunnel on your left to enter the room containing the blue keycard.

Head west through a cross-shaped doorway, watching out for one or two revenants behind you, then continue west past a structure with an unreachable megasphere and down some steps to a doorway between two red-striped poles. Go through the doorway then follow the passage round until you see the red keycard in a dead-end; run straight forward until you hit the back wall then stand still and turn round on the spot, as two crushing ceilings have activated behind you. Time your run past the crushers and go round the corner to find that a wall has lowered revealing two or four chaingunners - kill them immediately.

Go back to the room with the blue key and head through the north-east tunnel, then walk north into a water-filled room containing one or two pain elementals. Leave the room by the north-west doorway and follow the green tunnel south and west, killing any enemies that get in your way, until you have walked through a wooden trench and entered a second green tunnel. As you enter the tunnel you will see a doorway on your right - go through it and ride the lift in front of you up then turn right and walk through a wall that lowers ahead to enter a second large cavern with several monsters, including two chaingunners inside pillboxes. Cross the cavern to a gargoyle switch on the east wall between two red skull strips and press it to open a route to the exit teleporter.

If you wish to exit using the blue keycard, from the door after the chaingunner trap, turn right (west) and walk a short distance to see a tan door on your left with a button next to it. Press the button to open the door and reveal a chaingunner, then go through the door and turn left to collect an armor and a box of rockets ahead, which will open a trap behind you containing three to five Hell knights. Blow up the barrels at the south end of the room and pull the lever behind them, which will lower another wall where the armor was located revealing some imps. Go into this alcove and press the button here to re-open the entrance door, then go through before it shuts.

Head west down the corridor until you reach a fenced window with a cacodemon under it. Turn right then left, go down a couple of steps and walk through the tunnel on your left to enter the room containing the blue keycard, which is sitting on top of a pillar. Kill the shotgun guys and revenants in this room then head west through a cross-shaped door until you reach the structure with the megasphere. Turn left at this point then left again to go up some steps to the shotgun guys' ledge - from here you can make a running jump to the blue key and pick it up using a bump grab.

Head back through the north-east tunnel, then walk north into a water-filled room containing one or two pain elementals. Leave the room by the north-east door and follow the water tunnels back round to the moat you dropped into earlier, killing any enemies that block your way, then continue west until you pass through a metal archway and enter a green tunnel. As you enter the tunnel you will see a doorway on your left - go through it and head up the steps on your left, pass through a wall that lowers then turn right and follow the wall to a gargoyle switch between two blue skull strips. Pressing this switch will open a route to the exit teleporter.

After pressing one of the keyed gargoyle switches, drop into the moat and backtrack to the room with the megasphere. Go down the west steps then turn left and head past one or two chaingunners to a staircase leading up to a large room with two caged arachnotrons. As you reach the top of the steps, note the area on your right with the wooden columns as a large group of monsters will start teleporting to the four pads there.

After killing all the enemies, go to the area and kill the arachnotrons (and arch-vile on Hurt Me Plenty skill level or higher) then run across the moat and enter the exit teleporter in the middle of this area to finish the level.

* The vertex count without the effect of node building is 1424.