MAP26: Cusp of Agony is the twenty-sixth map of 2048 Unleashed. It was designed by James Paddock (Jimmy) and uses the music track "". 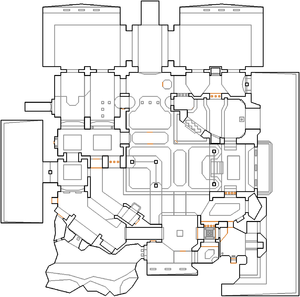 Map of Cusp of Agony
Letters in italics refer to marked spots on the map. Sector, thing, and linedef numbers in boldface are secrets which count toward the end-of-level tally.

Take the shotgun in front of you then drop down to the blood below and head east to get outside and confront some imps. Turn right and follow the wooden platforms past some imps and shotgun guys until you reach a set of steps, which lead up to a chaingun guarded by a cacodemon and one to three shotgun guys. Turn left and head into another building, where you will see the red skull key on a pillar guarded by two chaingunners, plus a Hell knight on Hurt Me Plenty (HMP) skill level or higher; turn left and step across a blood stream then press the lion switch on the other side, which will raise a bridge leading to a platform near the start point.

Head forward to a pentagram wall with a switch embedded in it (which requires the blue key) then turn left and enter a room with a demon and two chaingunners. Head forward until you drop into a blood pool and follow the passage east past some demons (collecting a backpack and berserk pack on the way) until you reach a chamber with the exit door, which is guarded by imps and a demon (or a knight on HMP or higher). Turn left and step into a white teleporter which will send you to a ledge with a chain switch; pull this switch and turn left to see a lift rising from the blood, then drop down to the lift and press the satyr switch on its side to lower the lift again. Ride it up and collect a super shotgun at the top, which you can use to kill the demons guarding the yellow skull key.

With the yellow key, open the yellow bars behind you and step through them - two alcoves will open to reveal a chaingunner behind you and a knight ahead (replaced with an arch-vile and a baron of Hell respectively on HMP or higher). After going through the bars, turn right and cross the bridge you raised earlier then turn left as soon as you reach the other side and go through a second set of yellow bars. Follow the path east past some demons until you reach a room containing the blue skull key, which is protected by one or more imps along with a knight on Ultra-Violence (UV) and Nightmare (NM) skill levels.

Head north through a set of blue bars to return to where you found the chaingun, then head north and west across the central bridge to reach the area with the pentagram wall. Press the switch recessed into it then turn round to see a pair of blue skull pillars on your left - walk between these and step across the small platforms to reach the ledge where you pulled the chain switch, which now holds a revenant (or arch-vile on UV and NM). Head east across another set of small platforms to reach an enclosed area with an armor and another switch - flip it to lower the red skull key (which you can see through the window) then head through the bars which open behind you and walk round to the red key. Watch out for the arch-vile that appears here on UV and NM.

After crossing the central bridge, look left to see a lion switch and press it to lower a lift which you can ride up to a walkway - at the end of the walkway is a cacodemon guarding a skull switch. Press the switch then run south-west to jump down to a ledge (with two imps and a revenant on UV and NM) then follow the path east until you pass under an archway. Look left at this point to see another skull switch which will raise a bridge and allow you to reach a room containing a rocket launcher and a backpack. (You can also reach this room by opening the red bars in the blue key room.)

* The vertex count without the effect of node building is 1407.