MAP26: DM2 is the second deathmatch map of Doom for Game Boy Advance. It uses the music track "Dark Halls." The author of the map is unknown. 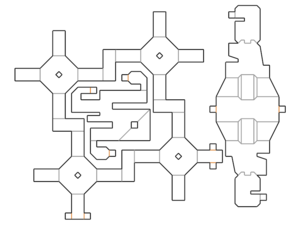 This map consists of three distinct and separated areas:

This level contains the following numbers of things in deathmatch mode. All skill levels contain the same number of things.