MAP26: Damned Strait! is the twenty-sixth map of Doom 2 the Way id Did. It was designed by Richard Frei in the style of John Romero. Its par time is 4:30. The par time defined in the DEHACKED lump is 4:30. 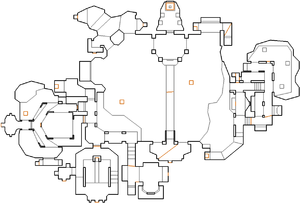 Map of Damned Strait!
Letters in italics refer to marked spots on the map. Sector, thing, and linedef numbers in boldface are secrets which count toward the end-of-level tally.

Turn right to enter into a corridor and walk on the stairs. Turn right again and go south on the corridor. Walk upstairs and head left. Enter a teleporter ahead. Destroy the barrels and enemies. Press the switch to make the floor of the room lower. Enter the next corridor and go up the stairs there. In the next room, open a door west which differs from other doors by its texture and is only one that can be opened. In the caged room, proceed northeastward past the closed baron art door to meet a switch. Press the switch to open the door. Head into that door. Press the lion switch in the room. Now leave the caged room and go to the previous corridor with three doors. The door in the south is unlocked now. In the next room, you can see a nukage pool. Turn left and rise on the stairs. Press the skull switch between two green torches. A western wall in this room is opened now, go there. Kill the chaingunners and press another switch here. Return to the nukage pool room and walk on the freshly risen bridge. Press another switch to unlock the last door to enter. Get back to the corridor with three doors and enter the northern one. In the lava room, get into the teleporter. This will bring you to the top of the level. Press the switch in the southwest of this area. This will lower a blocking-way ground with imps, lost souls and a teleporter. Go there and enter the teleporter. Kill the arachnotron in the next room and press the switch. The switch raises the large tall bridge leading to the very north, right to the exit room. However, a cyberdemon awaits you in that room and the door will open when you will walk on the bridge. Also, numerous cacodemons and some pain elementals will be here, so you can cause an infight between them and the cyberdemon. You either can pass the cyberdemon by simply entering his room and entering the exit or eliminating him. When done with him, go into the northern room and enter the sky teleporter.

* The vertex count without the effect of node building is 825.