MAP26: Dark Dome is the twenty-sixth map of Alien Vendetta. It was designed by Anders Johnsen and uses the music track "Into Sandy's City" from Doom II. It was one of the few maps to remain unchanged from the first release to the second. The par time defined in the executable is 19:20.

Inspired by Hell Revealed's MAP24: Post Mortem, this slaughter map takes place in a tall, large open cavern with a number of ledges and columns filled with monsters, with the player initially finding himself the hunted rather than the hunter. 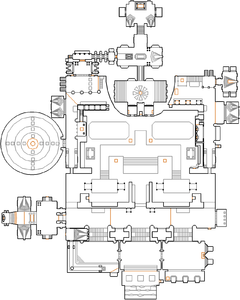 Map of Dark Dome
Letters in italics refer to marked spots on the map. Sector, thing, and linedef numbers in boldface are secrets which count toward the end-of-level tally.

This level will prove to be just as much of a challenge as the previous level. This time, the monsters will attack you right from the beginning from just about every direction. Fortunately you start right on top of pickups, so you will also be prepared right at the beginning. Still, it will be challenging to find a good foothold to hold against the many monsters both above and below you. It is highly recommended, if you have the health and ammo, to clear everything before proceeding with completing the level.

You should first head to the southern portion of the map. Climb up any of the staircases here. Head to the southeast room and press the switch here. Be on the lookout for two cyberdemons, as well as cacodemons and pain elementals. Now go to the southwestern area, and climb the set of steps into the water. There should be an opening to the north, so go here and kill the barons of Hell then hit the next switch. This raises some bars a bit of a distance north. Drop down to the water here, and there should be a lift next to you. Ignore it for now and keep heading north until you find another entrance on the left. This is a large, water-filled chamber. Get into the middle here and the blue skull key will be lowered via descending waterfall. However, picking it up bars you in and pits you against many monsters. Fight for your life there until the bars are raised, then return to the lift. Take it up, and you will find a room full of imps. Two switches are on the sides, guarded by barons of Hell. Press both of them and you will reveal a spider mastermind. Behind him is the next portal. If the barriers are back again (those switches are timed) hit the switches again and quickly go through. Look out for the walls of revenants when you go west towards the portal. Grab the soul sphere and take it to the northeast part of the map. Go up the stairs here and open the door to be greeted by a cyberdemon. Behind him is the yellow skull key, and grabbing it reveals some barons. Now go back to the teleporter and enter it. This time, you will teleport to a small corridor where an arch-vile is probably running around. At the end of this corridor, you will be near the middle of the dome, on a ledge with a yellow switch. Press it, and return to the water heading to the northwest. There should be an opening (you probably saw it when running around if you were in the northwest portion of the main area at the time, except it was blocked by a yellow skull bar), so go through it. Kill the revenants, then go up the stairs to a teleporter. Taking it will take you to a small alcove (telefragging an arch-vile if you have not killed him yet) where you will obtain the red skull key. You will then teleport back to the walkway at the starting point. Be extremely careful here as cyberdemons among other monsters will teleport into the field here. Head back to the northwest portion of the main area. Climb up the stairs, and if you have not done so already, hit the switch here to lower the wall revealing cyberdemons, barons, and the red door. Behind the door are a bunch of arch-viles, to the left is a megaarmor, which reveals a wall of chaingunners. To the right is a door to a large marble chamber. You can decide to go left to the exit here, or you can go right for an optional fight with a megasphere.

* The vertex count without the effect of node building is 3802.