MAP26: Fear is the twenty-sixth map of Scythe. It was designed by Erik Alm, and uses the music track "A Fool's Paradise" by Symphony X. 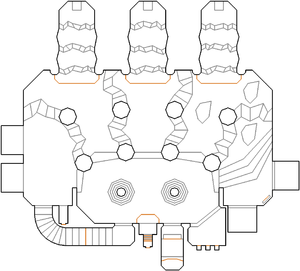 This level is the big slaughterfest where large hordes of enemies will not only attack you right from the start, but just about everywhere in the map. Some pain elementals, lots of mancubi, and tons of Hell knights are initially present on your main platform, while a wall of cacodemons will appear from the left. Cyberdemons are present in the distance to the north, three on each platform guarding one key each. There are several invulnerabilities and megaspheres on the big platform, as well as weapons on the edges with lots of ammo for them. Make sure you grab the weapons and ammo right away if you do not have them, especially the BFG9000, and make sure you use the powerups wisely. While on the big platform, look out as revenants will consistently teleport here. On the ground floor are several stalagmites with megaspheres nearby, again use these wisely.

On the ground floor, there are two switches to press. The switch on the right part of the map is guarded by a sole cyberdemon. Pressing it reveals two walls of cacodemons, as well as two walls on the big platform. One of these walls has two cyberdemons and a mancubus, the latter of which is on the level exit, but you cannot reach it yet. The other wall reveals a roomful of barons of Hell as well as three arch-viles. There are several powerups here, and three teleporters. To get there, go to the left part of the map at ground floor, to find an alcove with two cyberdemons and a switch. Pressing this switch reveals a staircase filled with revenants. Go to the end of this staircase, where two arch-viles are at, to open the way back to the big platform.

Now go through each of the three teleporters to get to the other side of the ledges where the cyberdemons were guarding the keys. When you drop from each ledge that contains a key, a massive horde of monsters will teleport on ground floor. You will need to repeat going into the teleporters two times to get the other two keys. Once you have all three keys, make your way back to the big platform and return to the starting point (there is also an invulnerability here if you did not get one earlier). There are three key doors you need to open here, open them and kill the arch-vile and then press the switch to raise a bridge so you can access the exit.

Although arch-viles are generally top priority targets due to their capability to resurrect defeated monsters, on this map you can take advantage of that power to resurrect monsters that have been killed too early to assist with consistent monster infighting.

Take advantage of the cyberdemons' power during infighting to thin out the other monsters.

* The vertex count without the effect of node building is 1389.