MAP26: Geist Halls is the twenty-sixth map of Community Chest 2. It was designed by Dr. Zin, and uses a MIDI rendition of the song "One of These Days" by Pink Floyd. 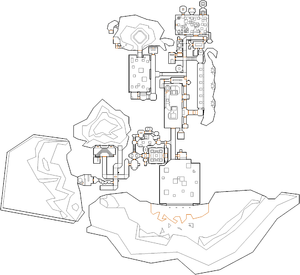 Map of Geist Halls
Letters in italics refer to marked spots on the map. Sector, thing, and linedef numbers in boldface are secrets which count toward the end-of-level tally.

In the cargo bay where you start, head to the northeast corner, climbing up the stairs to the balcony where the chaingunners saw you. There are two doors here with switches, the first one you come across has merely a light switch. The second door has two switches to get out of here. One raises the lift and the other opens the door. Head right at the fork, down the hallway, and left at the intersection. You will be faced on the left-hand side by chaingunners and revenants. Continue down this hall till you reach an industrial control center. Go right here, through the hallways and down the first lift via switch. Climb on the pipes as you wait for the lift to move you to the blue keycard. When you get it, go back to where you entered this place, finding the blue door and pressing the switch beyond it. Then, head all the way down the hallway taking the lift upward (there is a locked supply center to the right of the lift requiring the blue key). Immediately turn left and through the newly open area. Go right and hit the switch then go through the new passage into the cargo room. The lift at the cargo bay's entrance houses the next switch to press, revealing a baron of Hell on it. Do not be too slow to reach it, as it will rise up eventually. In this open field, find the lift to the left and use it to get the yellow keycard (do not forget the switch on the wall which lowers the lift where you entered this field) then backtrack to the industrial assembly line where the blue key was. The yellow door is on the south side of this area. Go take the right door into a rather cramped zone. To get the red keycard, take the lift directly to your left up and go through two doors. Take the door to your right to nab the keycard, then exit the way you came in. Enter the red door, take the lift up, and press both switches to exit. In the final cargo bay, there is a cyberdemon. Whether you choose to fight him or run is entirely up to you.

Because one secret relies on the presence of Commander Keens to reach, you can only get 85% Secrets in no monsters mode.

* The vertex count without the effect of node building is 2894.