MAP26: Hardcore is the twenty-sixth map of Doom 64, and the second "fun" level. It is designed by Danny Lewis Like the other fun levels it is only accessed through the "Features" menu. It uses the music track "Dark Echo", also heard in MAP10: The Bleeding and MAP24: No Escape. 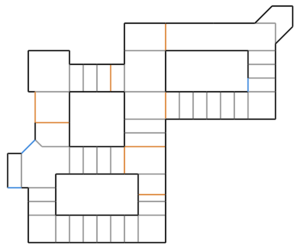 Map of Hardcore
Letters in italics refer to marked spots on the map. Sector and Thing numbers in boldface are secrets which count toward the end-of-level tally.

The level itself is a boxed-in set of staircases, where the player must fight through a few waves of demons. The stage starts with the player in the middle of it all facing a rocket launcher, rocket boxes, combat armor, and a huge army of mancubi the player must kill. There are certain sections within the map where the mancubi can teleport, increasing the difficulty level somewhat. Once they are all killed, the player must advance through the stage until he finds a ledge he must leap to from the highest staircase, where a megasphere, backpack, and a plasma rifle sit. Upon collection of the rifle, a large army of arachnotrons will teleport in and two energy cell packs will appear on the ledge. The player must then leap down and reenter the fray. Once the player has killed every arachnotron, a cyberdemon, super shotgun and many boxes of shells will teleport into the stage. Killing the cyberdemon ends the level.

Considering the natural difficulty of the map, any player who attempts to conquer it should bear in mind to try and use their weapons conservatively, as ammunition is scarce and difficult to acquire when the various demons horde together and effectively block it.

One effective method is to attack the mancubi while they are greatly grouped together with the rocket launcher, as the splash damage will help reduce the number of rockets needed to kill all of them.

Also, only collect the ammunition boxes when the ammo on-hand takes more than one unit to replenish, to take advantage of being able to use all available ammunition in the map. Any ammunition item picked up when the on-hand ammo is near max capacity will only top it off to the max, which effectively wastes the potential ammo to be acquired, never to be able to pick up again. This is important since, as aforementioned, ammunition is scarce in the map, and the player will need all he/she can get, especially when going up against the cyberdemon.

* The vertex count without the effect of node building is 98.