MAP26: Hellhole is the twenty-sixth map of Whispers of Satan. It was designed by Paul Corfiatis, who also wrote the music track for this level, "Orgolia". 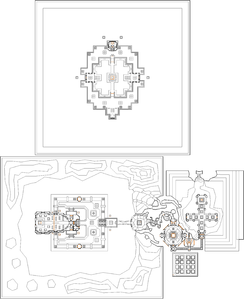 Map of Hellhole
Letters in italics refer to marked spots on the map. Sector, thing, and linedef numbers in boldface are secrets which count toward the end-of-level tally.

Grab the supplies and then turn around to face a chapel. You need to head around both sides of this fortress, and climb the steps to a door. Enter the door to find a switch. After hitting the switches on both sides of the chapel, the front entrance to the chapel will be accessible. Go inside and kill the enemies. As you approach the throne with a switch an arch-vile teleports directly in front of it. Press the switch to release some imps outside and some lost souls as well. The bars that you were facing when you started the map will also be lowered, allowing access into the red cave. Cross the walkway into the cave and press the switch, but watch out for imps that attack you when you press it. Follow the cave, ignoring the teleporter on the right until you reach a door. Open it to reveal a room with monsters and a large lava fall (watch out for the imps that ambush you from behind). Press the switch that is behind the lava fall to open two side compartments, each containing a mancubus and a switch. Press the switches to remove the bars from the next door, and go through that door to reach a staircase. Go all the way down the stairs and the door will open at the very end. In this next area, kill the shotgun guys, imps, and revenants, plus lost souls and cacodemons that appear from the right. Press the two switches in this area to clear the way ahead to a teleporter, and then take it to a big arena. Here, there are imps on the walls of the arena, and on the left and right forts, you will find a spider mastermind and a cyberdemon, respectively. Both of them guard switches which remove barriers to the exit doorway, so make sure you hit both switches. When you do that, press the northern wall with the skull on it to ride up, and then press the switch here. The exit door will be straight ahead.

When you are on the staircase leading downward after the room with the lava fall, there will be a side passage with a revenant at its entrance. Enter this area and go around to the cross on the floor. When you do, a backpack will appear. Note that this area is a damaging floor, so it may not be worth risking your health to go in.

* The vertex count without the effect of node building is 5949.