It was the twenty-ninth map to be submitted, arriving 48 minutes before the 24-hour mark. 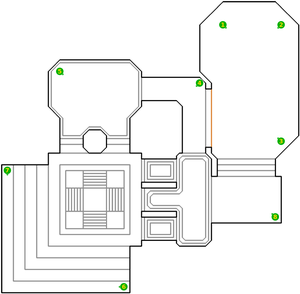 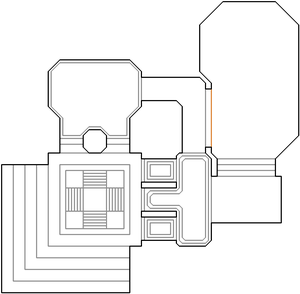 MEAN GREEN features a simple layout that covers a moderately large area. The texture scheme is based around the colour green, with marble bricks and green walls covered in brown vines prominent across the map. There are four areas, two of which are outdoors, and the other are indoors although large portions of their ceilings feature skylights.

One of the outdoor areas dominates the north-east of the map. A super shotgun lies at the centre and a box of bullets is nearby to the north-east. The three spawn points in this area are all equidistant from the super shotgun. Adjacent to this area is the central room, an indoor segment that ties the other three areas together: It connects to the north-east area by stairs to the south and a lift to the west, and from here short hallways lead to the two western areas. More bullet boxes can be found in this central part.

The north-west area is the other outdoor section, though it is much smaller in size than the north-east. Like the north-east area, a super shotgun can be found at the centre.

The south-west area is a large room with a marble floor. There is a small square pit in the centre with stairs on all four sides to get back out, though it contains no items. Large steps wrapping around the south-west corner of the room are a good supply of ammo, with a total of two shell boxes and two bullet boxes. A super shotgun is also sitting at the bottom of the steps. As with the north-east area, the two spawn points in this room are equidistant from the super shotgun.

Health is limited in the map to five medikits. Two are in the marble room, and the other three are in each of the other areas.

This level contains eight spawn points. All spawns have a chaingun placed just in front of them.

* The vertex count without the effect of node building is 229.