MAP26: Marbelous! is the twenty-sixth map of Congestion 1024. It was designed by Richard Hardacre (Cycloid) and uses the music track " ". 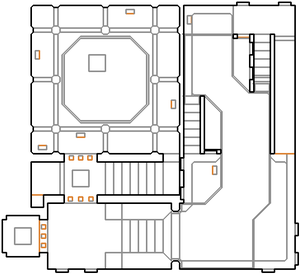 Map of Marbelous!
Letters in italics refer to marked spots on the map. Sector numbers in boldface are secrets which count toward the end-of-level tally.

At the start, go down the stairs in front and turn left twice. Go forward and around the structure in front to reach a switch. Flip it and turn around to see a wall lowering in front, revealing another switch. Press it, look to the left and repeat the process. This last switch will lower the pillar to your left containing the blue key so you can collect it. Return to the starting room and open the blue bars to your right. Use the switch ahead, drop down to the right and flip the switch to lower the red key pillar to your left, then grab the key.

Backtrack to the starting room and this time go through the red bars to your left. Go to the left, down the stairs and follow the blood pool until you spot some stairs on your left. Climb them up and press the switch to the left. Go forward to drop down to the blood pool again and climb up the stairs to your left. Go to the left and use the switch, then turn around to see a wall lower next to the stairs. Make your way to it, follow the path and pick up the yellow key on the left at the end. Turn around, climb up the stairs in front, open the yellow bars and enter the exit teleporter.

* The vertex count without the effect of node building is 527.