MAP26: Mordin's Pass is the twenty-sixth map of Project Einherjar. It was designed by Mike MacDee (Impie) and uses the music track "". 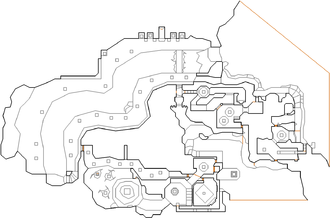 Map of Mordin's Pass
Letters in italics refer to marked spots on the map. Sector, thing, and linedef numbers in boldface are secrets which count toward the end-of-level tally.

Walk to the right along the cliff: when you grab the pile of goodies at the far end, the wall opens into a murder window manned by Stepchildren. Entering this small base, you'll quickly find yourself surrounded by fire-loving Purgers. Along the next cliff is a Valraven ambush and several doors, the first of which leads to the blue door and a switch door that gives you a shortcut back to your starting point. The second door is sealed and can't be opened until later: it cuts through the mountain to the exit switch.

The third door leads inside the ominous tower, where several unfortunate men are suspended in cages over freezing water. There is a yellow door here as well. Fight your way to the frozen river on the other side: across this river, the exit is visible, but the bridge has collapsed. Grab the yellow key and use the frag cannon to shoot down the Sky Hounds that appear. Take the key back to the tower's yellow door and kill the Sister for the blue key.

Beyond the blue door is a dark maze lit only by flashing blue strobes. The boss lurking here is also dressed in blue (a Sister or Sheriff depending on difficulty) and very difficult to see. Kill him/her to open the way to a switch that raises the bridge to the exit and summons more Sky Hounds.