MAP26: Plutopia is the twenty-sixth map of Plutonia 2. It was designed by Thomas van der Velden, and uses the music track "Plutopia" by James Paddock. The par time defined in MAPINFO is 5:00. 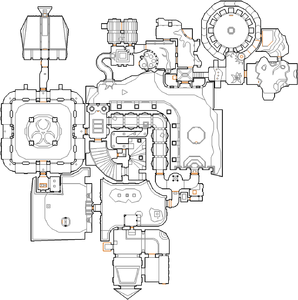 Map of Plutopia
Letters in italics refer to marked spots on the map. Sector numbers in boldface are secrets which count toward the end-of-level tally.

Shoot down the two shotgun guys at the start as well as the chaingunners through the fence. Press the switch to reveal another yard with several enemies and the blue skull key. Climb the steps up to where the revenant is and open the door. Kill the former humans on the balcony as you make your way to the switch, which lowers you to ground floor. Venture back outside and you will find that you can get the blue key now. Head through the blue door (not forgetting to flip the lever for the rocket launcher if you have not done so already), and you will find a fork. Head left, where the arch-vile and zombiemen are, and open the next door. Follow the next hall to a half-open door. Before the door is an open vent cover; crawl through it killing demons along the way, and drop into the storage room. Kill the enemies here, and walk up the stairs with barrels on them to the next door. You will then be on the other side of the half-open door. Press the lion switch to open it and the western door, and go through the western door.

In this large area, a spider mastermind is in the middle guarding the yellow skull key, while other monsters patrol the outer perimeters. Kill the ones on the perimeters first, as well as the cacodemons, then take out the spiderdemon and get the yellow key. There are two lifts here, going north and south. Take the southern one for now, and up top should be the yellow door. Kill the arch-vile at the top and enter the teleporter. This one takes you back to the right side of the fork that you were in when you opened the blue door. Now open the yellow door and head outside. There are several zombiemen and cacodemons, plus revenants on the castle walls ahead. Kill the enemies and proceed further down the yard, where you will spot a giant open mouth. You need to go through it, and just follow the one way path past the mouth, until you reach a room with tan panels that you cannot open. Opposite the panels, you can head through the tendrils and hit the eye switch, which opens up the panels. Go through them, towards a red door, then turn left (you can get a megaarmor and a berserk pack from the lift to the right, if you need them), down the stairs. Kill the monsters present and enter the hole in the wall. Grab the super shotgun and ammo boxes then flick the eye switch. The ground you are on will steadily rise, while imps will attack you from different directions. When it rises up all the way, kill the remaining imps, as well as the revenant, then head southwest through the opening. The path circles all the way around the room you were in, and then you will loop back around to the previous room, landing on top of the red skull key.

You will notice that you cannot leave the area yet, so head through the red door on your left. Flick the switch after killing the monsters in this area, and the cross straight ahead will invert. Drop into the blood and find an opening to the north. Some cacodemons and mancubi will rise to meet you, so get rid of them. Press on the spinal wall to lower it as a lift; riding it back up you will find yourself back at the looping path. Drop down again and you will find that you can now leave the area. Open the red door you saw earlier as you were heading towards the red key area and you will be back outside. You will then have to contend with a cyberdemon and a mancubus, so grab the plasma gun and energy cell packs and dispatch the monsters. The eye switch inside the cyberdemon's pen opens up bars blocking the entrance, from which you should head through and back to the yellow key area. You can do that right away by taking the teleporter that appears after the yellow door (look out for chaingunners through the bars, however). Once back, go around the perimeters of the yellow key area to get to the red door, killing the two revenants as well. Open the red door and use the lift to head upwards. At the top, there are imps to the sides, and when you approach the torus that is the exit, several barons of Hell, an arch-vile, and a revenant will try to stop your exit.

* The vertex count without the effect of node building is 4213.