MAP26: Pride of the Descent (Hadephobia)

MAP26: Pride of the Descent is the twenty-sixth map of Hadephobia. It was designed by Marcell Izidor Cellavy (Cell) and uses the music track " ". The par time defined in the DEHACKED lump is 5:00. 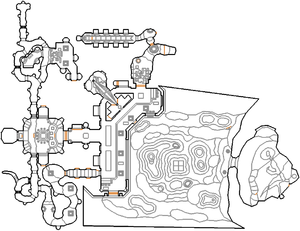 Map of Pride of the Descent
Letters in italics refer to marked spots on the map. Sector numbers in boldface are secrets which count toward the end-of-level tally.

The player 2, 3 and 4 starts (Things 462, 463 and 464) have no flags set for any of the three difficulty classes, but because of special handling in the engine, they function normally in the level.

* The vertex count without the effect of node building is 3641.