MAP26: Proving Grounds is a level in Strife. It uses the music track "Industry".

To reach the laboratory where the next piece of the Sigil is located, Strifeguy must navigate a maze of high ledges, walkways and lifts. 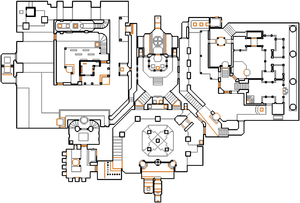 Map of Proving Grounds
Letters in italics refer to marked spots on the map. Sector, thing, and linedef numbers in boldface are secrets.

This level includes many high ledges and long drops, so to avoid taking significant falling damage you should use lifts and staircases whenever possible. The number of enemies in this level increases significantly on Veteran skill level or higher, mainly ceiling turrets and sentinels, so be aware of your surroundings as you can be shot by enemies far above or below.

Approach the door in front of you which will automatically open to reveal a room with two lifts. Take the left-hand lift down to ground level and turn left to destroy a reaver which tries to ambush you. Go west to another lift and ride it up to the top level to reach a barred area; step off the lift and the bars will automatically open. Watch out for two turrets here on Veteran or higher, then open the door to find a room with a varying number of acolytes and crusaders. Drop into the water in this room and turn the switch on the north wall, which will open a metal barrier ahead.

Use the lift to climb out of the water and head through the north door, watching out for the stalker and templar behind it, plus another turret on Veteran or higher. Go down either staircase to go back outside, then turn left and go down the lift to a lower floor. Turn right and drop off the ledge, then look at the door in front of you. Look right to see another lift to the east of this door; step on it to be taken to a higher ledge with two more turrets on Veteran or higher. Go through the tan door in front of you and throw the switch on the wall next to the door. This will reveal a teleporter elsewhere in the level.

Go back through the tan door and use the lift to return to ground level. Head north until you are able to turn left, then immediately turn left again to find a small staircase - go up it and follow the passage, destroying a turret on the way, and step into the teleporter at the end. You will appear on a ledge north of the starting area - turn round and drop off the ledge, then turn left to find another lift ahead. Ride it up and then turn right to find the teleporter you revealed earlier. Step into it to enter a small room - throw the switch on your left, then step into the teleporter ahead to return to your previous position.

Throwing the switch has lowered the bars here, allowing you to enter the north-eastern area of the level. Be careful as an inquisitor guards the building ahead on Veteran or higher and may have gotten outside. Carefully step on the hazard markings to raise the lift, then step on it and let it take you down to ground level. Turn left and head north until you reach an area with three teleport pads - step into the west pad and you will enter a tiny room with a switch. Throw the switch and step back into the teleporter, which will put you inside a large building near the three teleporters you encountered earlier. The aforementioned inquisitor will be here if it has not gotten outside, so be ready to defend yourself. Leave the room you are in and turn right to enter a large hallway with round pillars; turn right again and head forward until you see an opening in the wall on your right. Drop off the ledge and head straight forward down a staircase and through a door.

You will be outside again. Turn right to get back to the three teleporters, and step on the middle pad this time to get to another tiny room with a switch - throw it then step back in the teleporter to return to the building you were in earlier. Head forward and turn left to go back into the large hallway, then head forward to the wall opening and turn left to drop off the left. You will now see a teleporter in front of you; throwing the switches in the tiny rooms has opened the bars blocking it. Step into this teleporter and (on Veteran or higher) be ready to defend yourself against a templar, acolyte and turret which surround you. Step forward to drop down to a lower room, slay the templar blocking your path on Veteran or higher, then go through the door ahead to reach the laboratory.

The interior of the western building's top floor holds numerous items, including ammunition for all weapons and healing supplies.

* The vertex count without the effect of node building is 2452.