MAP26: Revengineer is the twenty-sixth map of TNT: Revilution. It was designed by TheMionicDonut and uses the music track "God Ov Julenca," by Viscra Maelstrom. The par time is 45 seconds. 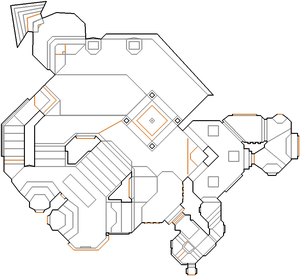 Map of Revengineer
Letters in italics refer to marked spots on the map. Sector, thing, and linedef numbers in boldface are secrets which count toward the end-of-level tally.

The map was originally designed for and created in Abyssal Speedmapping Session 27 in early 2016. However, due to issues pertaining to textures, the level set and map were believed to be lost in development. The map was retooled and rebalanced a year later for TNT: Revilution, and appears in its retooled form in the set. The rights issues were resolved later in the year and Abyssal Speedmapping Session 27 had its idgames release, with the original map intact, in early 2018.