MAP26: Sever the Wicked is the twenty-sixth level in the Ultimate Doom episode of the PlayStation and Sega Saturn versions of Doom. It is based on the original E4M3: Sever the Wicked, with modifications made to adapt the map to the consoles' limitations. The author of the original map is Shawn Green. 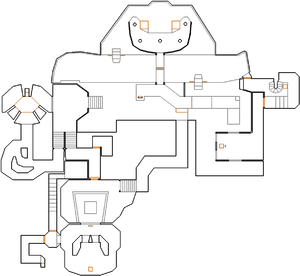 Map of Sever the Wicked
Letters in italics refer to marked spots on the map. Sector, thing, and linedef numbers in boldface are secrets which count toward the end-of-level tally.

This level has two keys: red and blue. You can get them in any order.

In the starting area, you can see a skull switch to your left. Press it to build a bridge leading east to another ledge. Walk across this bridge to get to the other side of the wooden platform and take the invulnerability powerup. While you are protected, head due west to a staircase leading down. In front of you is a window leading to a lift, and to the left are two staircases. To get the red key you can do the following now:

For that reason, method #1 offers a safer way of getting the key while method #2 should be completed when you are protected with invulnerability.

Backtrack to the starting point. If you got the red key first, use the lift on the south side of the wooden platform to get back on top of it. Open the red bar to the north to reach the ledge with the blue skull key.

If you want to get the blue key first, drop down into the western lava pool and press either skull switch to lower the lift. Head north around the wooden structure and you will see two lifts here. Use either lift to get up to the ledge with the blue key and take it. To get back, you will need to drop into the eastern lava pool and press the skull switches here to lower a lift which will get you back to the main area of the level.

When you have both keys, drop down into the eastern lava pool in the starting area. Open the wooden door requiring the red key in the south-east corner of the pool. Climb the stairs and open the blue door at the top. Head left into the room and enter the exit teleporter at the end.

If you step backwards as soon as the level starts, you will drop onto a hidden ledge with a berserk pack, a backpack and a partial invisibility powerup.

Another partial invisibility powerup can be found on a ledge above the western lava pool in the starting area. To get it, head due west from the starting point and approach the staircase in front of you, but instead of going down the stairs hug the north wall and follow it round to the powerup.

As the level starts, you can turn left to see a tunnel with a plasma gun in it. To get to this tunnel, head due west and go down the stairs, then go south up another staircase and follow the passage through a wooden door. In the next room, turn left and head up a third staircase, then follow the passage to get the weapon.

A rocket launcher can be found in an octagonal room in the south-west corner of the level. It is connected to the room you enter to find the switch that lowers the red key platform.

Five of the seven barons of Hell that appear in the level on Ultra Violence skill level are replaced with Hell knights.