MAP26: The Abandoned Mines is the twenty-sixth map of Doom II. It was designed by John Romero and uses the music track "Message For The Archvile". The par time is 5:00. 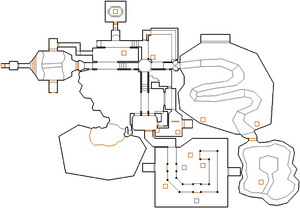 Hit the switch and follow the caged hallway crossing an intersection and turning left at the end. After eliminating the cacodemons, flip the switch and go back into a new access at the corner. When you have dispatched the imps, get the red keycard and go back to the hallways. Return to the intersection, go west and enter the red door.

Cross the pool of lava and climb the stairs. Watch out for the baron of Hell who will be in a small raising section. Get the blue keycard and retrace your steps back out the red door. Follow the whole walkway until you arrive in a huge room with a curved walkway above another pool of lava. Watch for cacodemons to rise from there and follow the walkway to the blue door.

In the outdoor area, make your way around the walkway to a platform with a yellow keycard. Retrace your way back through the huge room and back into the caged hallways. At the intersection, go back north, around the corner and enter the yellow door near the switch you hit for the red keycard. Jump in the hole to exit.

At the level exit door, linedef 761 has its upper texture on the wrong side, resulting in a small Hall of mirrors effect.

Sector 12 uses the flat CEIL5_2 instead of F_SKY1. While this cannot be seen in vanilla Doom, it is possible to see this flat texture from the sky in source ports with free look support.

There is a teleporter on the bottom of the lava pool in the yellow keycard area. It takes the player back to the northern end of the curved walkway, allowing them to shave a few seconds off their time after the keycard has been obtained.

The official French name of this level is Les Mines abandonnées (accents are not reflected in the game itself due to technical limitations).