MAP26: The Aquaduct [sic] is the twenty-sixth map of 10 Sectors. It was designed by Chris Lutz and uses the music track " ". 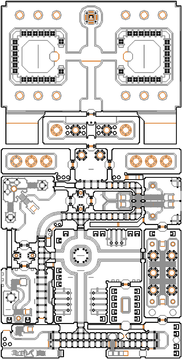 Map of The Aquaduct
Letters in italics refer to marked spots on the map. Sector, thing, and linedef numbers in boldface are secrets which count toward the end-of-level tally.

Go forward, in the next big room you will find a shotgun. Head west of it, through the aqueduct network going south. The next room has a few enemies as well as a plasma gun to the south. Take the lift in this room and follow the walkway to the yellow keycard, being wary of a nasty ambush that follows.

Return to the big room and head through to the south aqueduct network. Go west and through the opening where you will find another shotgun in the next room. Use the lift to go up and then jump across the break in the walkway to the water. You can head through the next tunnel from here, and make sure to grab the super shotgun nearby if necessary. You will emerge in a room at the southeastern corner of the map, where the yellow door is. Behind the yellow door is a walkway with revenants and cacodemons flanking it, with several weapons to pick up as well. Head across the walkway and into the next room. This room has the blue key, but you cannot reach it just yet. Instead, take the lift you can access up and go across the walkway to the next room, where you will get the red keycard.

You will then have to backtrack to the yellow key room as the red door is there. From the southeastern room, take the southernmost path, using a lift and then crossing the bridge over the water, where you can easily head back to the big room. Open the red door when you reach it and head through to the next room. There are several pickups on the walkways if you need them. After you do that, head east, but not in the water, through the door, back to the red key room. There is a tear along the fence on the left side; go through it and take the lift up. Follow it back to the blue key room and you will be able to get the keycard.

Now backtrack again, back to the previous room that held the pickups, and take the watery path this time. Follow it around to a room with several blue doors. Take the door on the left to find the red skull key, then take the northern door. Head around the structure and then open the red skull door for the final room. Get the megasphere and be prepared to fight a cyberdemon and a spider mastermind, guarding the remaining two keys. It helps to get the two to infight if possible. When they are dead, get the two keys and open up the exit to the north.

In the big room with the shotgun at the middle, a wall near the western tunnel can be opened for a berserk pack. It is not noticeable at first, but if you press the wall you will hear a lift noise, and can walk through the wall to pick up the item.

Next to the yellow card door, press on the wall just west of it. You will hear lifts lower, run west quickly (the walls can be walked through) for health bonuses and a soul sphere.

In the blue keycard room, press along the southwestern wall and walk through it. Press the next wall with the face on it for an arch-vile and a megasphere.

The blue door going east is optional, but it does have a hidden wall near the two silver pipes that can be opened for energy cell packs. An arch-vile teleports into the room with the blue doors when you pick up the items though.

* The vertex count without the effect of node building is 10799.