MAP26: The Blood Tunnels is the twenty sixth map of Perdition's Gate. It was designed by an unknown contributor.

Plot: You are inside the blood tunnels of Hell. They will lead you in the direction you want to go. Keep pressing on. 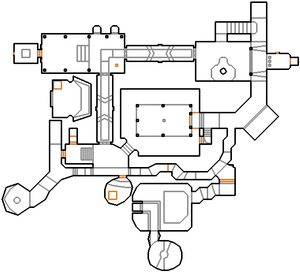 Map of The Blood Tunnels
Letters in italics refer to marked spots on the map. Sector, thing, and linedef numbers in boldface are secrets which count toward the end-of-level tally.

You begin this map on damaging blood. Grab the radiation suit directly to your right and head down the canal until it splits. Either take a left and go through the door and head down two small flights of stairs, passing the yellow door, or take a right down the blood canal past the blue door and then a left to find a small flight of stairs leading up, to be presented with a cage of cacodemons and pain elementals. The yellow key is contained inside. Head around the back of the cage where you will find a radiation suit. The floor beneath it will lower into the cage and grabbing the key will lower the entire wall where the radiation suit was allowing the player to escape back into the blood canal.

Take a right and run past the blue door back to the canal split and through the door to the yellow door. Behind it is a teleporter that will take you to the right side of the map behind some bars you could probably see from down in the yellow key cage.

Pressing the switch will lower the bars and also reveal the blue key. Go straight ahead, jumping over the blood canal toward the red door you can now see. In the corner of the red door room is the blue key. Head over to the blue key door and head down the stairs behind and deal with the foes at the bottom, where you will find the red key around a corner.

Head back to the locked door, behind which is the exit.