MAP26: The Savage Abyss is the twenty-sixth map of Jenesis. It was designed by James Paddock (Jimmy) and uses the music track "Song in the Key of TNT," composed by Jamie Robertson. The par time is 4:30. 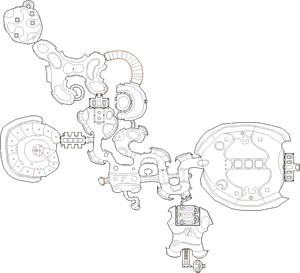 Map of The Savage Abyss
Letters in italics refer to marked spots on the map. Sector numbers in boldface are secrets which count toward the end-of-level tally.

Right after around 78% of level completion you might find a small texture under a wall saying:

It seems to be some sort of inside joke as thing 227 is in fact a health bonus and not a "STUMPY" which are the peaked brown things. Curious enough one of the pits near where this health bonus shall spawn (at the beginning of the map) does not hurt the player... maybe the map creator is telling us something...

Keep playing the map there is nothing else to discover about this.

* The vertex count without the effect of node building is 4894.