MAP26: Weapons Bay is the twenty-sixth level of Icarus: Alien Vanguard. It is set on the weapons bay of the exploration cruiser, Icarus, and was designed by Jim Dethlefsen. 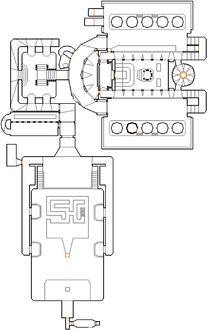 Map of Weapons Bay
Letters in italics refer to marked spots on the map. Sector numbers in boldface are secrets which count toward the end-of-level tally.

For the quick way of beating the map, drop down from the start and head into the C-shaped hall and go through the passage west of the shotgun. Head all the way through to the hall on the other end, then go south and east. You will eventually see a large open area with monsters ahead. There are mancubi and Hell knights sniping at your position, and a cyberdemon is lurking on ground floor (on Ultra-Violence or higher. Head down the steps to ground floor and find an entrance to the structure in the middle. Navigate the maze there until you reach some stairs leading to the top of the structure. Pick up the red key and head south to find a teleporter taking you to the platform with the mancubi. Head south from there and press the switch to lower a lift with a baron of Hell. Ride it up and enter the "PLANET EXIT", pressing the furthest panel on the right.

Climb the steps up to the central section of the first area. Enter the caged area where the super shotgun is and press the switch to lower the soul sphere platform.

In the C-shaped hall, you will find a switch and a door to a windowed area with a BFG9000. The switch triggers a crusher inside the BFG room. To safely get the gun, do not press the switch, and just head through the door, and the next one. When you grab the gun, you will be locked in for thirty seconds; leave when it opens.

On the southern section of computer columns in the first area, the second one from the left can be opened on the southeastern side for a plasma gun.

There is a side path just before the large area to the south that loops around a windowed room. You can get a soul sphere and a megaarmor in here.

The data was last verified in its entirety on April 6, 2015.

* The vertex count without the effect of node building is 1480.