MAP27: Alter of the Tech Base Castle of the Apocalypse is the twenty-seventh map of 32 in 24, a deathmatch megawad. It was designed by Andrew Wood (Catoptromancy) and uses the music track " ".

It was the thirtieth map to be submitted, arriving 43 minutes before the 24-hour mark. 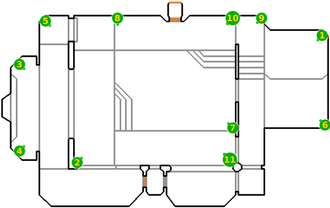 Map of Alter of the Tech Base Castle of the Apocalypse 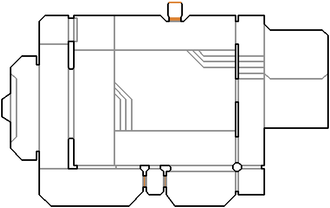 Map of Alter of the Tech Base Castle of the Apocalypse

This is a very small map, occupying an area of just 1808x1128 map units. It features a predominantly wooden theme, with a small grass pit at the centre of the map, which contains no items.

The western end of the map is accessed from some steps in the north-west corner. A rocket launcher can be found here, and if the player moves around to the southern wall of the map from here, they will find a shotgun next to a slightly obscure door (two vertical wooden panels) which opens to reveal a small room containing the BFG9000. The other side of this room is also a door, and a chaingun replaces the shotgun on this side. Whilst the west end of the map holds the rocket launcher, the east end holds some ammo for it - four loose rockets. Of course, since the BFG room is two-way, players can cross it from the east as an alternative route to the rocket launcher room.

The exit door along the northern wall opens to reveal a tiny room with a medikit, a stimpack, and a chainsaw.

This level contains eleven spawn points, all of which are placed on top of a super shotgun.

* The vertex count without the effect of node building is 184.