MAP27: Ammut is the twenty-seventh map of Epic 2. It was designed by Alexander S. (Eternal) and uses the music track " ". The par time defined in MAPINFO is 5:30. 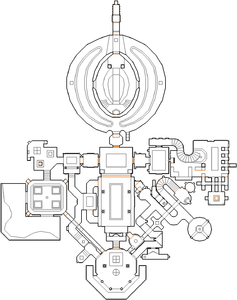 Map of Ammut
Letters in italics refer to marked spots on the map. Sector numbers in boldface are secrets which count toward the end-of-level tally.

Head northeast from the start and keep going until you reach a fork. Turn left towards the torches and press on the green torch to lower it. Quickly run southeast, and at the next fork keep going southeast and get the soul sphere before it rises.

* The vertex count without the effect of node building is 1962.