MAP27: Anti-Christ is the twenty-seventh map of The Plutonia Experiment. It was designed by Milo Casali and uses the music track "I Sawed The Demons" from Doom. Similarly to MAP24: The Final Frontier, this map takes a lot of inspiration from MAP29: The Living End from Doom II insofar that it involves large subterranean areas where most of the action takes place on narrow ledges and pillars high above damaging floors. 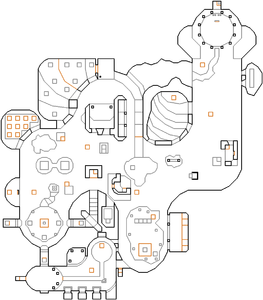 Map of Anti-Christ
Letters in italics refer to marked spots on the map. Sector, thing, and linedef numbers in boldface are secrets which count toward the end-of-level tally.

Start moving as soon as the level begins, as you will be set upon by chaingunners to your left and right, and through the fence behind you is a revenant on a platform. Quickly kill the chaingunners on your right and head down the steps to a circular platform with a supercharge. As you approach the supercharge, alcoves on the east, south and west walls will open to reveal three pain elementals, and on Ultra-Violence (UV) and Nightmare (NM) skill levels they will be joined by three Hell knights that teleport to the platform.

Once the monsters are dead, run into the east alcove and follow the steps down until you can make a running jump to a teleporter guarded by another chaingunner. You will land in the chaingunner cage west of the start point, and if you look left you will see that an arachnotron (two on Hurt Me Plenty (HMP) or higher) has appeared in another cage north of the start point. Press the skull switch here and use it as cover while you kill the arachnotrons, then step into the teleporter behind you to return to the start point. Go down the steps to the circular platform and run into the south alcove this time to find a plasma gun.

You will now be in an oval room, which contains three chaingunners on UV and NM. Face east and step onto a narrow walkway over a blood pit, watching out for a ledge that opens on your left to reveal more chaingunners, and kill an arachnotron waiting at the end of the walkway before taking the yellow skull key. Taking the key will open a niche in front of you containing a partial invisibility and an energy cell pack - use these items to help kill the chaingunner and two cacodemons that have been released behind you, along with a pain elemental on HMP or higher.

Head back along the walkway to the oval room and enter the west alcove to collect a backpack. A teleporter will lower in front of you, but arm yourself before stepping into it as you will be assaulted by a mancubus behind you and two chaingunners off to your right; on HMP the second chaingunner will be resurrected by a concealed arch-vile, and on UV and NM there will be a third chaingunner above the mancubus. Walk north on to a catwalk, but use caution as after stepping off the first step a wall on your left will open to reveal more chaingunners. Continue along the catwalk until you reach a yellow key door and walk through it with caution.

The next room is seemingly empty, but as you pass the second step a teleport trap will activate and you will find yourself surrounded by five knights, along with four revenants on HMP or higher. Kill or dodge them and head up the steps to a berserk pack, then run through the doorway next to it to reach a teleporter on a square platform. You will find yourself in a spiderdemon's line of fire (plus two arachnotrons on HMP or higher); quickly drop down to the platform on your right and press the button here, then step into the nearby teleporter to reach a safe area. Go down the steps and take all the supplies here before stepping on another teleporter with a super shotgun, as a tough fight lies ahead.

You will be on a fenced platform with the blue skull key in front of you, but when you approach it a wall to the east will lower and reveal four chaingunners, as well as two revenants and a knight that teleport to the platform - on HMP this is increased to three revenants and four knights, and on UV and NM the chaingunners will be joined by a mancubus. Use the BFG9000 to clear the enemies quickly if you have it, then step back on the teleporter to escape the trap.

You will be back on the platform with the tan catwalk. Head north along the catwalk again until you reach the bend, where a wall has lowered to reveal pain elementals and barons of Hell. Eliminate them then head east to a bridge leading to the spiderdemon's platform, eliminate it then press the skull switch it was guarding to open some blue skull bars in front of you. Step across to the exit teleporter, grab the berserk pack then enter the teleporter to finish the level.

* The vertex count without the effect of node building is 1155.