MAP27: Cursed Kingdom is the twenty-seventh map of Requiem. It was designed by Iikka Keränen, and uses the music track "Rage" by Mark Klem. 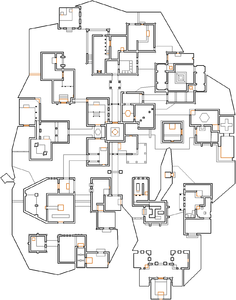 Map of Cursed Kingdom
Letters in italics refer to marked spots on the map. Sector, thing, and linedef numbers in boldface are secrets which count toward the end-of-level tally.

Pick up the shotgun as you jump from the waterfall and head north into the first building. Take the lift inside and head up and right to the corridor to find a super shotgun. Take the nearby lift up to find arachnotrons at the top. Go past them on the walkway and head west into the next building, taking the next lift up. Head right at the top and press the switch to open the faceted wall that is just outside of this building to the south. Head into this building, killing spectres and demons and take the next lift up to a switch. This switch opens the walkway to your right, so follow it into the next building. Kill the mancubi inside and press on the metal wall to the right to reveal a new room with several spectres on the wall. Grab the chainsaw and press on the gray pillar with the baron face on it to lower it, but watch out as the spectres will be released. Ward them off and grab the soul sphere that was on their platform. Then head through the passage to reach an elevator with a plasma gun. Use the down switch to lower yourself into a room full of imps. Get out of this room to the south to get back outside, then head west and circle around the next building until you find its entrance. Head inside and use the lift, but watch out for the baron of Hell on it. Kill the zombiemen on top and head into the next building via the walkway. Use the next lift in this building to go downwards, and go down again to the next room with the arachnotron. Hit the switch to raise a platform so you can head out of the window here, then head through the window to the next building with the mancubi.

Use the lift to go upwards, and kill the Hell knights in the next room. Press the switch here to lower the nearby wall as a lift, then ride it upwards to a room of imps. Enter this room and head north on an outside walkway full of mancubi. As you go, watch out for the arachnotrons on the far ledge on the right. At the end of the walkway there should be a soul sphere and a lift, so grab it and drop down onto the ledge with the arachnotrons. There should be a switch here, flip it and go due south, until you find an entrance to the next building. Enter the cargo bay and go through the passage, and then go up the metal lift to the higher floor. Head around here until you find a switch on the blue wall. You may have to hit it from the side, as the front portion of the ledge juts out a bit too far. Either way, hit it and leave the cargo bay to find the gate to the south is open.

In the next field you will find a large castle-like structure directly to the south. Enter it and turn right to find a lift you can use. Ride it up to find monsters guarding the blue keycard. Drop back down and take the blue door inside the castle. There will be a dead marine and a trail of blood near a lift. Ride it up to acquire the BFG9000, but look out for the chaingunners that pop up. Flip the switch here and quickly use the lift that lowers outside before it rises, and at the top flip the next switch and jump out to the northeast to find a new building open with revenants inside. Enter the lounge-like area in this building and take the lift facing the chairs down to a room with some crates. Take the lift up here to be confronted by some mancubi, and head back outside onto a raised area. Head for the lift to the left to grab a few cell charge packs and flip the switch here. When you go back down, you will see a cyberdemon inside a new building to go to. Kill him and proceed into the building to find an arachnotron and yet another lift to go up on. The next room has health bonuses in a central pond and some chaingunners. Drop into the chute to the south to a room of imps, going back outside onto a raised area towards a faceted wall. Open this wall to reveal an arch-vile and some imps behind a counter. To get over it, use the nearby lift, and when it is rising, jump to the switch past the counter. Press it and head back outside, then circle right around this building. You will find another wall is lowered revealing a mancubus and another entrance inside the central brown building.

There are arachnotrons in the next room, so kill them and head into the next room going down to another room with imps and a switch. The switch raises a bridge to the other building with spectres inside. Use the lift to retrieve a cell charge pack and ride it up to a hall with lots of imps. Just follow the path through the building, looking out especially for the hall that has a lot of barons of Hell in it. When you reach the switch, hit it to lower the bars behind you to another raised outdoor area, then enter the next building. Go through this building until you emerge in the northwestern outdoor area. Enter the northwest building and ride the lifts up to reach the yellow keycard. Drop back down and exit this building, going directly south to the next building. Ride the lift up and follow the path through the yellow bars until a big room with a yellow door and a switch. Hit it and take the yellow door, then turn left and watch as the wall lowers, and then you will see a new opening to the building that is on the right. Go up the stairs and on the porch of this building, looking out especially for barons of Hell right next to the entrance. Enter to find some mancubi in front of you and an arch-vile directly to your left. Head for the structure behind the mancubi and use it to obtain the red keycard, then climb the steps to where the arch-vile was to find the red door. Look out for teleporting monsters when you do. Simply go through this building until you reach the raised walkway outside. Head down this walkway and open the door to find the spider mastermind and the exit.

In the northwest building at the southwest of the level, there is a chainsaw in front of a demon face; pressing on it lowers both the plate and the floor behind you. The north side of the plate (linedef 523) is also flagged to do this, but is untagged. As a result, pushing it will cause every untagged sector to undergo this effect, trapping you inside the room and preventing completion of the map.

* The vertex count without the effect of node building is 2090.