MAP27: Engraved Bones is the twenty-seventh map of NOVA II. It was designed by James Caldwell (Obsidian) and uses the music track "Cryptology," originally composed by James Paddock (Jimmy) for the Harmony MIDI Pack. 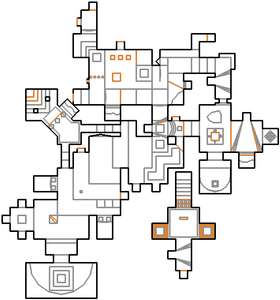 Map of Engraved Bones
Letters in italics refer to marked spots on the map. Sector numbers in boldface are secrets which count toward the end-of-level tally.

* The vertex count without the effect of node building is 1051.

The map was inspired by the song "March of the Fire Ants" by Mastodon, to which the creator listened for four hours straight when making the initial map.